Hussain Mohi-ud-Din Qadri, president of MQI's Federal Council, who is currently on visit of England, held a meeting with Dr Martin Whittingham, Director of Muslim-Christian Studies Centre (Oxford University), on January 3, 2009. The University administration had extended special invitation to Sahibzada Hussain Mohi-ud-Din Qadri for meeting and visit. It should be kept in mind that he is also first Asian president of an Australian University where he is pursuing hid PhD in Economics these days. Dr Raheeq Ahmad Abbasi, Secretary General of MQI, Ishtiaq Ahmad Qadri, vice president of MQI (UK), Lord Lt. Munawar Hussain, Deputy Director of Oxford Shire and Shahid Mursaleen, spokesman for MQI England, were also part of the delegation led by Sahibzada Hussain Mohi-ud-Din Qadri. 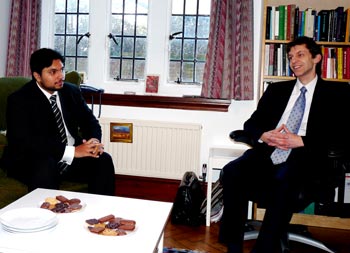 Speaking on the occasion, Hussain Mohi-ud-Din Qadri said that religions taught us how to order our lives and create discipline in our doings and if all religions joined hands on one-point agenda of the protection of humanity, the entire world would become a hub of peace and tranquility. He said certain international powers were using religions for political purposes thereby giving birth to violence, chaos and massacre of innocent people. He stressed the need of familiarizing the people with teachings of religions for the sake of establishing better relations among communities and religions. Media could also play central role in that regard.

Dilating on the domestic situation of Pakistan, Hussain Mohi-ud-Din Qadri said that whatever the circumstances, violence never broke out here on the basis of religion in last 62 years. Contrary to that, India, which claims to be the biggest democracy in the world, had been experiencing religious and ethnic violence every now and then. Christian, Hindu and Sikh minorities were enjoying better rights in Pakistan than was the case in India. He said that Minhaj-ul-Quran International had projected religious tolerance and harmony at practical levels as one of the most important objectives during the last 30 years. Dr Muhammad Tahir-ul-Qadri, the founding leader and patron-in-chief of MQI, established a Muslim-Christian Dialogue Forum (MCDF) to give institutional character to the interfaith dialogue and provide a platform for interaction among Muslims and Christians. The forum had so far hosted and organized scores of programmes. He told the Director that MQI was the first mainstream religious organization, which had been celebrating Christmas and other religious festivals under MCDF at the central level. 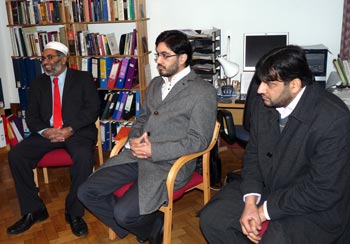 Dr Martin Whittingham, Director of Muslim-Christian Studies Centre (Oxford University), said that his Centre was playing the role of an 'intellectual bridge' among Islam, Christianity and other religions with a view to fostering understating and minimizing the differences among the communities. He said that he was impressed by the scholarly capabilities of Hussain Mohi-ud-Din Qadri and work of Minhaj-ul-Quran International for minorities and peace. He said that if followers of all religions learn to respect one another and demonstrate it practically, the violence may be eliminated from the world.

Dr Raheeq Ahmad Abbasi said that the fundamental principle of Islamic teachings is peace, love and tolerance and MQI was working to promote these values throughout the world under the leadership of Shaykh-ul-Islam Dr Muhammad Tahir-ul-Qadri. He said that there was a need to further strengthen the dialogue among religions and communities for a better and peaceful world.

Ishtiaq Ahmad Qadri threw light on the detailed steps of MQI's engagement and liaison with local institutions, official and unofficial organizations in different fields. Lord Lt. Munawar Hussain also appreciated the spirit which characterized the working of MQI in different walks of life especially peace, human rights and interfaith dialogue and expressed his hope that frequent interactions would continue in the future as well. 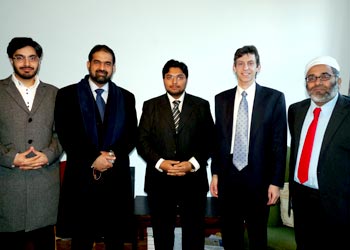