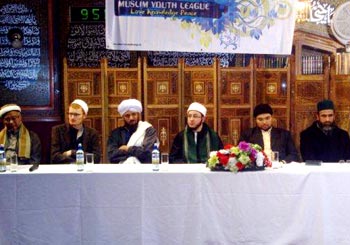 By the grace of Allah SWT and his beloved Prophet (S.A.W), Minhaj-ul-Quran International, London, held its 10th annual New Year’s Dhikr on the 31 of December 2009. A brilliant initiative over the past decade, this New Year’s Dhikr was by far the most successful with the attendance surpassing over 700 brothers and sisters. Starting promptly at 8 pm, after the recitation from the Holy Quran, Shaykh Sana Ullah Sethi reminded the brothers and sisters present of how blessed they were to be ending 2009 in the Dhikr (remembrance) of Allah and beginning 2010 once again in the remembrance of our Lord. By 9 p.m., the event was at its peak when Shaykh Habib Kazim al-Saqqaf from Tarim in Yemen and Sahibzada Hussain Mohi-ud-Din Qadri made their respective entrances. Secretary General of MQI Dr Raheeq Ahmad Abbasi congratulated Minhaj-ul-Quran London, especially their MYL branch in holding such an auspicious event.

Shaykh Abdul Basit Qadri then took the stage to welcome the chief guest of the event, Sahibzada Hussain Mohi-ud-Din Qadri. Brother Abdul Basit listed the achievements of Shaykh Hussain Mohi-ud-Din Qadri to date still at the mere age of 27, which include his articles on economic, political and international issues printed in national newspapers and numerous books on various topics. He went on to describe his monumental educational background, completing his education across the globe ranging from Canada, France, Pakistan and currently pursuing a PhD at a University of Melbourne in Australia where he is also the head of the Student’s Union. He is the first Pakistani and Asian to be the recipient of this honour. Humbled by such an introduction Sahibzada Hussain Mohi-ud-Din then was asked to deliver his words of wisdom. Shaykh Hussain spoke of the great honour blessed upon those in attendance in remembering Allah and his beloved Prophet (S.A.W). 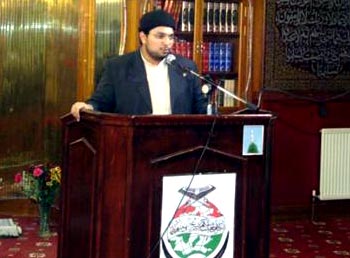 The topic he chose to deliver his talk was on Ritual Prayer (Salaat). His elegant speech was to prove that all the elements of the five pillars of Islam were apparent in the sole act of Salaat. Namaz was identified as Jami-ul-Ibadah. The essence of the speech echoed that Salaat differentiates between a Muslim and a Non-Muslim. He went further to discuss the importance of each act within the Ritual Prayer and its significance, establishing that each act (Qiyam, Ruku etc) was a submission to Allah SWT and the Sajda being the ‘maximum manifestation to the submission of Allah SWT’.

The message to the audience was that people will not change and cannot be expected to change if they do not perform a quality Salah. Each act within Salah is to prostrate and bow to Allah and we would not reap the rewards of our Salah unless we began to show this in each act of our prayer we perform.

Shaykh Hussain then spoke of the term ‘Allahu Akbar’ which each Muslim within his prayer will echo well over a 100 times a day in five daily Ritual Prayers. The term itself means Allah is the Greatest. Though we repeat these exact words dozens of time a day, we as humans still want to satisfy our Nafs (ill-commanding self) and worldly lusts. The core message was that though we tell Allah He is the Greatest, we do not respect our prayers so how could we expect to respect all the other activities and acts we do in our day-to-day lives. In reality our behaviour is fraudulent in the eyes of Allah. 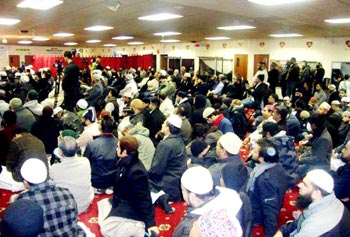 In the end Shaykh Hussain Mohi-ud-Din Qadri quoted a Hadith of Prophet (S.A.W) which was narrated by Imam Hasan RA, whereby Allah stated 3 things He expected in a ‘quality prayer’. (1) When in prayer there must be a total submission of the body (2) having the concentration of the heart towards Allah SWT (3) Tears in the eyes of the person whilst in Prayer. While concluding his speech, Shaykh Hussain emphasized the importance of the tears in Salah as Allah SWT has stated that if these 3 things are attained within Salah, He will come so close to you that the individual will not be able to imagine the extent of this. Those gathered were truly influenced by these words to such an extent that they remained silent with their heads lowered in contemplation.

After the speech of Shaykh Hussain Mohi-ud-Din Qadri MYL London showed a short presentation of the teachers/students of Huzoor Shaykh-ul-Islam and what famous Shayukh and World leaders had to say about his personality. 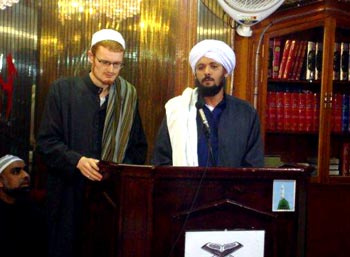 Shaykh Habib Kazim was then introduced to the stage accompanied by a translator (Amin Buxton) as he delivered his message in Arabic. He also echoed the words of Sahibzada Hussain Mohi-ud-Din Qadri and went further on to talk about the importance and virtues of the Dhikr of Allah. He stated that a heart, which does not have the Dhikr of the Lord, is a dead heart. Shaykh Habib Kazim also spoke about the importance of the love of the Prophet SAW, the Ahlul Bayt, the Sahaba and the Muhabbah of the Ahlullah (people of Allah). The Shaykh highlighted that the love of those who love Allah SWT and his beloved people will ultimately lead you to love Allah and his Rasool (S.A.W). He stated that this was the means to gaining lights from the Messenger of Allah SAW.

As the clock struck 12 and we entered into 2010 Shaykh Sadiq Qureshi, Ameer-e-Tehreek London, thanked both Sahibzada Hussain Mohi-ud-Din Qadri and Shaykh Habib Kazim for their moving words and thanked the scores of people who attended the event. After a short Dhikr, Shaykh Ahmad Saad (new imam of Finsbury Park Mosque) made Dua and with it the programme came to its conclusion at 1 am. 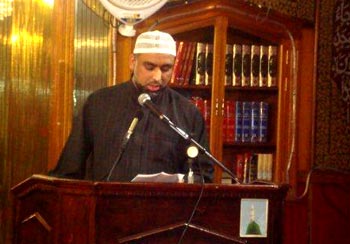 The gathering was also attended by Shaykh Abu Bakr Ba Shuaib who is from the same spiritual school of thought as Habib Kazim and Fuad Nahdi who heads the Radical Middle Way (RMW) organisation with whom this event was organised.

The guests later gathered together in the main office at Minhaj-ul-Quran London to receive some books of Shaykh-ul-Islam Dr Muhammad Tahir-ul-Qadri gifted by Hussain Mohi-ud-din Qadri. They were so astounded at the quality and quantity of literature produced by Shaykh-ul-Islam that Shaykh Habib Kazim described it as a ‘karamah – miracle’!

This was no doubt about the fact that it was a luminous and breathtaking gathering for those who were blessed enough to attend it. The message of remaining steadfast in Salah and the love of Allah SWT and His beloved people was the perfect way for beginning a New Year. We pray for a successful 2010 for Minhaj-ul-Quran with the blessings of the Holy Prophet SAW and his chosen Wali’s, and pray for the long life and exceptional personality that is Shaykh-ul-Islam. 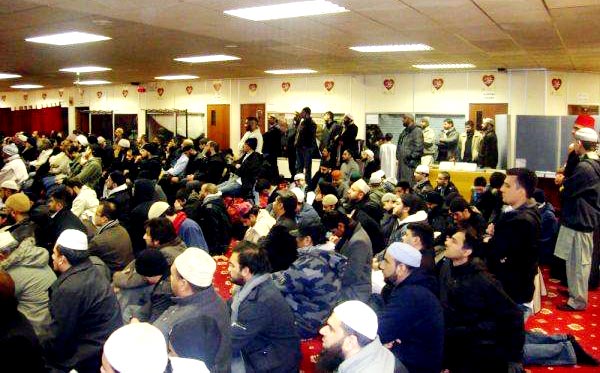