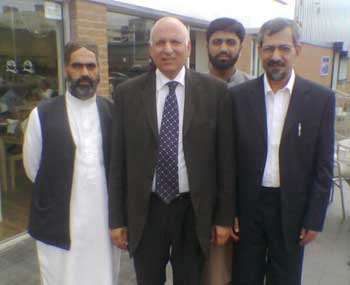 G M Malik, Principal Secretary to Patron In-chief MQI, and Spokesman Pakistan Awami Tehreek during a meeting with Mr. Muhammad Sarwar, Member Britsh Parliament, briefed the M.P regarding the MQI. The worthy MP was informed that MQI is active working in 82 countries in the fields of education, welfare and religion grooming of youth inbeing them with a moderate, tolerant fact of Islam. Mr. Muhammad Sarwar appreciated Shaykh ul Islam Dr Muhammad Tahir ul Qadri for his immense contribution towards Education and Peace in the World. He also promised that he will try his best for a piece of land to establish a centre of MQI in Glasgow. Mr. Abdul Wahid President MQI Glasgow and Mr. Shahid Baber Director MQI Glasgow also were present in the meeting.