Dr Hassan Mohi-ud-Din Qadri, President of MQI’s Supreme Council, has said that oceans of people would reach Lahore on December 23 to give historic welcome to Shaykh-ul-Islam Dr Muhammad Tahir-ul-Qadri, which will be the biggest peaceful gathering of the country. 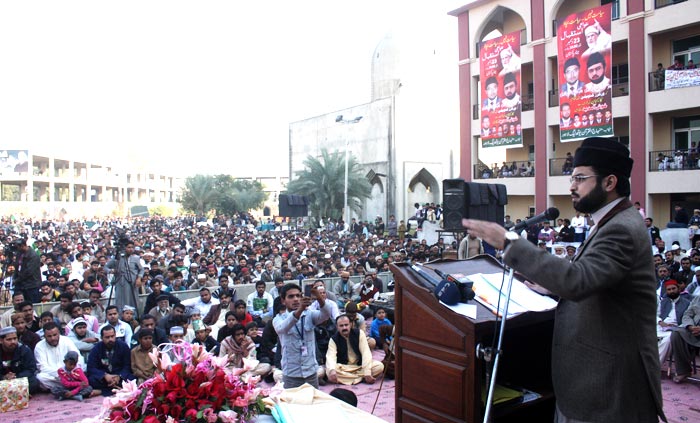 He said that the hundreds of thousands of people from across Lahore would reach Minar-e-Pakistan and play host to Dr Tahir-ul-Qadri. He said that new-year would commence with positive turn of events for the country. The arrival of Dr Tahir-ul-Qadri would result in the country’s stability, progress and prosperity. He would announce national reform agenda on that day.

Dr Hassan Mohi-ud-Din Qadri said that the agenda of Dr Tahir-ul-Qadri would weave various segments of Pakistani society into a united whole. He asked the people to work hard day in and day out and reach Minar-e-Pakistan in order to bring about change in the country.

Speaking on the occasion, Dr Hussain Mohi-ud-Din Qadri, President of MQI’s Federal Council, said that electoral system was totally rotten and it was hard for people to breathe in this stinking environment. He said that there was dire need to purge the system of its afflictions and make it corruption free. He said that continuation of dynastic politics was a hurdle in the way of socio-economic development of the country and stunted the growth of democratic institutions. He said that the current electoral system paved the way for those wearing “sherwani and suits” to impose authoritarianism, which needs to be got rid of.

Dr Hussain Mohi-ud-Din Qadri said that Dr Tahir-ul-Qadri had a clear national agenda, which he would unveil on reaching Pakistan. This agenda, he added, would change the destiny of the nation. He said that Lahore always played a leading role in the national politics, hoping that the people of Lahore would reach Minar-e-Pakistan in their hundreds of thousands to repeat history.