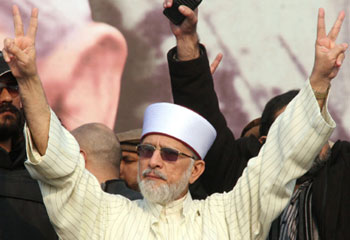 ISLAMABAD: Thousands of Pakistanis crammed into hundreds of vehicles streamed towards Islamabad on Monday in a protest march led by a Tahir-ul Qadri, Chief of Minhaj Ul Quran, demanding key electoral reforms.

Qadri accuses the government of being corrupt and incompetent. He is demanding that Pakistan enact reforms before general elections scheduled to be held by mid-May.

Mobile phone networks have been shut down along the route, an increasingly common precaution designed to stop the Taliban and other militant groups detonating bombs.