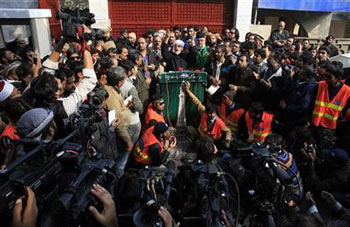 (Reuters) - A month ago, Muhammad Tahirul Qadri was living quietly in Canada, immersed in the affairs of his Islamic charity and seemingly far removed from the pre-election power games shaping the fate of politicians in his native Pakistan.

In the past three weeks, he has returned home to lead a call for electoral reforms that has earned him instant celebrity, sent a stab of anxiety through the ruling class and raised fears of trouble at a planned rally in Islamabad on Monday.

"Our agenda is just democratic electoral reforms," Qadri told Reuters in the eastern city of Lahore, the headquarters of his Minhaj-ul-Quran religious foundation. "We don't want the law-breakers to become our lawmakers."

Qadri's platform hinges on a demand that the judiciary bars corrupt politicians from running for office and that the army plays a possible role in the formation of a caretaker government which is due to manage the run-up to elections this spring.

But his sudden ascent has prompted speculation that the military, which ruled Pakistan for decades, may be using him as a proxy to delay the polls and install a compliant interim administration to serve at the generals' pleasure.

On Sunday afternoon, television channels broadcast images of several thousand supporters leaving Lahore in a convoy of buses bound for the capital of Islamabad.

It was not clear if they would reach the capital on Monday. Several roads leading into Islamabad were sealed off and lines of shipping containers moved into place to block off the streets containing top government offices.

The cleric's overnight transformation from a scholar-philanthropist into a media sensation commanding huge crowds has thrust a new wild card into the fraught run-up to the polls.

The elections, if they proceed on time, could cement Pakistan's transition from military rule by marking the first time a civilian-led government has completed a five-year term and handed over power at the ballot box.

Western allies believe a smooth vote will bolster democracy in a nuclear-armed country beset by challenges from a Taliban insurgency to a rivalry with India and an economy struggling to employ a youthful population of 180 million.

That Qadri should have chosen such a delicate moment to launch his protests - which take place against a backdrop of a wave of bombings last week that killed more than 100 people - have led many to question his timing and motives.

Suspicions that Qadri may be acting at the behest of generals has been sharpened by his praise for the army's fight against the Taliban and his insistence that the military might play a useful consultative role in the formation of a caretaker government which will oversee the pre-election period.

Qadri, who champions religious tolerance and once issued a fatwa against the Taliban, denies any relationship with the army and stressed his march would be peaceful. The military issued a statement this month denying speculation it was backing Qadri.

"I am one of the biggest staunch believers and ambassadors and propagators of democracy in the whole world," Qadri said. "I have no link with any military institution."

Memories linger, however, of Qadri's prominent role in supporting former army chief and president Pervez Musharraf after he seized power in a coup in 1999. Qadri served in the national assembly under Musharraf before moving to Canada in 2006, apparently disillusioned by his former ally.

Qadri has sought to tap a deep well of contempt for the government of President Asif Ali Zardari, dismissing Pakistan's evolving democracy as a sham that perpetuates the rule of self-serving dynasties.

A lavishly-funded publicity blitz has seen him figure regularly in newspapers and television shows, where he is invariably portrayed wearing a crown-like Islamic scholar's hat and holding his arm aloft in a victory salute.

Qadri's core demand is that the government implement a set of electoral reforms ahead of the polls - raising the prospect of protracted wrangling that could potentially delay the vote, currently projected to take place as early as April.

Among the measures Qadri is demanding is that the judiciary rigorously enforce an existing provision in the constitution that bars politicians suspected of corruption from running for office - a rule which he says would bar many lawmakers.

Zardari's ruling PPP and its main rival, the PML-N, are united in the belief that the polls should go ahead on schedule and seem unlikely to embrace Qadri's agenda, which some experts say jars with provisions in Pakistan's constitution.

Qadri exploited the reach of his Islamic foundation, which is active across Pakistan and in dozens of countries, by mobilising some 200,000 followers in Lahore on December 23, but he has yet to win solid support beyond his religious base.

His limits were exposed last week when the MQM, a secular party which dominates the commercial capital Karachi, said it had pulled out of initial plans to back his protest in Islamabad.

Not averse to a touch of theatre, Qadri told Reuters he had summoned his children to his home in Lahore to hand them his will in case his opponents attempted to bomb the rally.

"I have told my family, my children and all workers, if they kill me, don't go for revenge," Qadri said. "Almighty Allah will take revenge on them." (Editing by Jeremy Laurence)