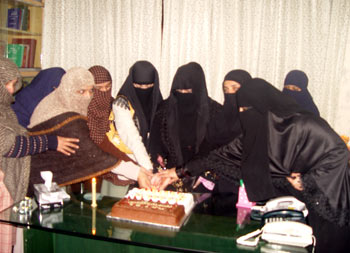 The meeting started at 11a.m. with the recitation of the Holy Quran followed by Naat. Talking at the occasion Qurra tul Ain Fatima said that the society was faced with prospects of social and familial deterioration and the condition of woman folk was pitiable. The reason of our problems lay in our alienation from the right path and teachings of the Holy Prophet (saw). She said woman had a full role to play in today's world. No society could progress without the rehabilitation of women at their right place in society. This could only be possible if women followed Huzrat Fatima (RA) in her footprints. "We want to see woman into an ideal role as mother, daughter, wife and sister. It is for this purpose that Minhaj-ul-Quran Women League was established", she said. At the occasion of 19th Foundation Day of the organization, we should resolve to work for the improvement in the lot of women and spread awareness among them regarding their rights. She said we would have to impart such training to children so that they should be able to become useful members of the society. Minhaj-ul-Quran Women League has embarked upon the mission of spreading this awareness through the message of Shaykh-ul-Islam. Time was not far when this awareness would take the shape of an organized movement. She said that Women League was also working for the spiritual well being women folk through a number of programmes.

Nazima Women League Farah Naz said no society could move up the ladder of progress without the participation of its women. The League would step up its efforts for gathering women on a single plate forum for the solution of their problems.