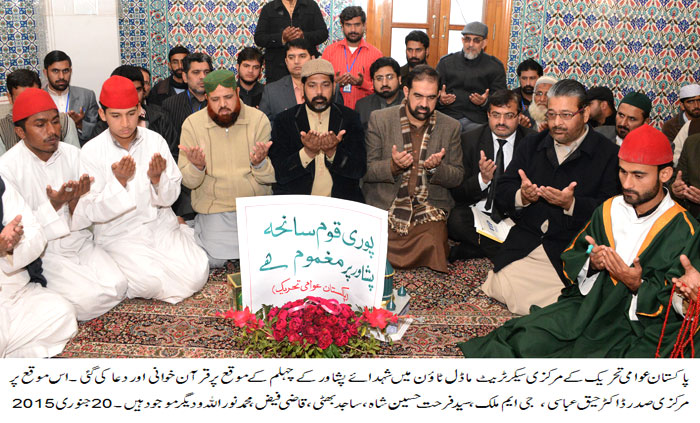 On the occasion of Chehlum of martyrs of Peshawar tragedy, Dua and Quran Khawani ceremonies were held at the Islamic Centres in over 100 countries of the world including Pakistan under the banner of Pakistan Awami Tehreek and Minhaj-ul-Quran International. The central Dua and Quran Khawani ceremony in this regard was held at the central PAT secretariat in Model Town, which was attended by central PAT and MQI leaders such as Dr Raheeq Ahmad Abbasi, GM Malik, Allama Farhat Hussain Shah, and a large number of workers.

Speaking on the occasion, Dr Raheeq Abbasi said that PAT leader Dr Tahir-ul-Qadri had instructed the PAT and MQI chapters in the world to hold Dua and Quran Khawani ceremonies for the martyrs of Peshawar tragedy. He said that the purpose of holding these ceremonies was to express solidarity with the bereaved families and to pray for the departed souls. He said that we share the grief and sorrow of the affected families.

Allama Syed Farhat Hussain Shah led the Dua for the departed souls of the Peshawar tragedy. The participants of the ceremony prayed to Allah Almighty to rest the departed souls in peace and give patience to the bereaved families to bear the irreparable loss of their near and dear ones with fortitude and courage. Special Dua was also made for elimination of terrorism and restoration of peace in the country.