Secretary General of Minhaj-ul-Quran International, Dr Raheeq Ahmad Abbasi, has said that MQI has issued instructions to all of its branches and local chapters to organize relief camps across Pakistan under the banner of Minhaj Welfare Foundation for the rehabilitation of one million internally displaced people who have had to migrate to other parts of the country following military operation against the militants. He said that Shaykh-ul-Islam Dr Muhammad Tahir-ul-Qadri has directed MQI organizations across Pakistan to take measures on emergency basis in this regard. He said that Minhaj Welfare Foundation would leave no stone unturned to achieve this target.

He expressed these views while speaking to media after an emergency meeting of CWC of MQI in the central secretariat yesterday. Director Minhaj Welfare Foundation Dr Shahid Mahmood, Sajid Mahmood Bhatti and Dr Tanvir Azam Sandhu were also present at the occasion. He said that all chapters of Minhaj Welfare Foundation would launch a fund-raising campaign throughout the country and the internally displaced people would be helped through provision of eatables, tents and medicine. The meeting of Central Working Council (CWC) of MQI met earlier in the day to consider fast developing situation in the Malakand region in the background of military action against the militants. The CWC expressed its deep concern over the deteriorating conditions and issued immediate instructions to the local organizations to take steps for relief and rehabilitation of about one million people who were rendered displaced for no fault of theirs. The meeting also deplored the fact that the misguided elements had made life difficult to live for hundreds of thousands of people in the name of Islam, which was in fact misinterpretation of the golden teachings of Islam. 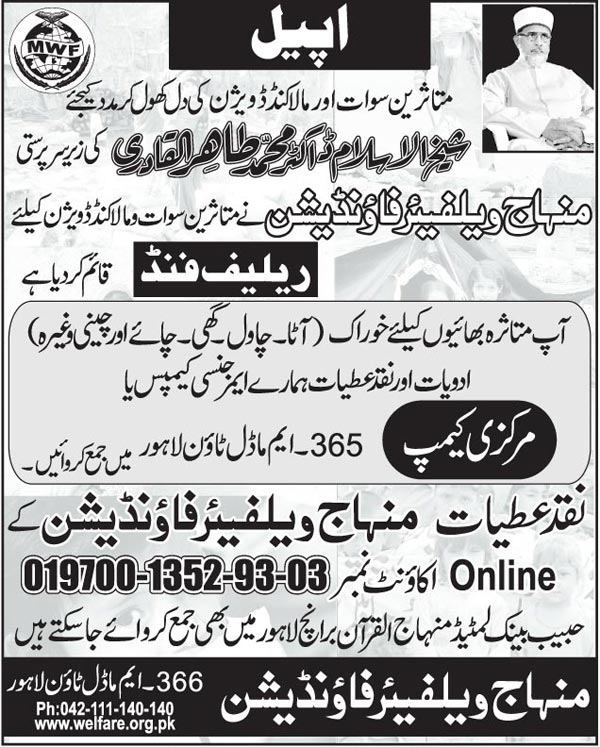