The recent floods that swept through all the four provinces including AJ&K and Gilgit-Baltistan left behind woeful tales of devastation, grief and sorrow. Such has been the enormity and scale of destruction caused by the raging waters that millions of people were rendered shelter-less with their livestock, property and all belongings flooded away. The hundreds of schools and basic health centres were also destroyed. Today our suffering people including women and children need us and we would not fail them at this critical hour of our national life.

In her speech, Ms Sumaira Rafaqat said that Shaykh-ul-Islam Dr Muhammad Tahir-ul-Qadri gave special instructions and ordered thousands of volunteers and workers of Minhaj-ul-Quran International to devote themselves to the cause of rescue, relief and final rehabilitation of the flood victims. In compliance with Shaykh-ul-Islam’s orders, MWF carried out relief and rescue operations at a massive scale. She further added that MQI would not leave the flood hit people alone and support them in every possible way in the rehabilitation phase. She said that serving the humanity is the mission of MWF. 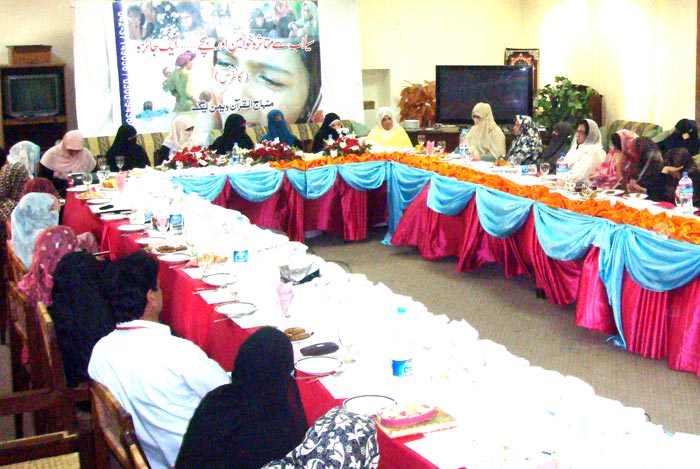 In her speech, Ms Sadaf Iqbal threw light on the details of various relief and welfare activities of Minhaj Welfare Foundation. She told the audience that a number of tent settlements were established where thousands of people were accommodated and provided with all the necessities of life. She further added that MWF stays engaged with the flood victims and is providing them assistance in various forms. She urged all sections of society to come forward and help those entrapped in the distress.

Speaking on the occasion, the various speakers appreciated the welfare work of MWF in the flood hit areas and expressed the need of continuing the good work until the complete rehabilitation of the affected people. They said that all of us should unite on the issue and join forces with one and another to mitigate the sufferings of our brethren.