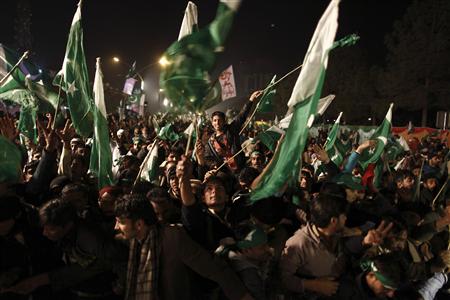 ISLAMABAD (Reuters) - A populist Pakistani cleric told tens of thousands of supporters gathered in the capital for an anti-corruption rally early on Tuesday morning that they could force the government to quit within hours.

Supporters of Sufi cleric Muhammad Tahirul Qadri heeded his call to move towards parliament and removed the barriers put in place to contain them until they reached the square in front of the building.

"The march is over and the revolution has started," said Qadri, who shot to fame since returning from Canada a few weeks ago, demanding an interim government.

"I give the president and prime minister until this morning to dissolve parliament and quit power," he told the crowd, who showered his bulletproof vehicle with rose petals as he arrived in the early hours of Tuesday.

He told his supporters to move from their official demonstration area - next to the city's main road, Jinnah Avenue - and head for parliament.

Qadri said the stage set up for him should be dismantled and reassembled in front of parliament. He promised to address the crowd at 11 a.m. (0600 GMT).

Qadri says he wants the judiciary to bar corrupt politicians from running for office and has said elections scheduled for this spring should be delayed indefinitely until Pakistan's endemic corruption is rooted out.

Qadri's call has divided Pakistanis. Some hold him up as a champion of reform, others see him as a possible stooge of the military, which has a history of coups and interfering in elections.