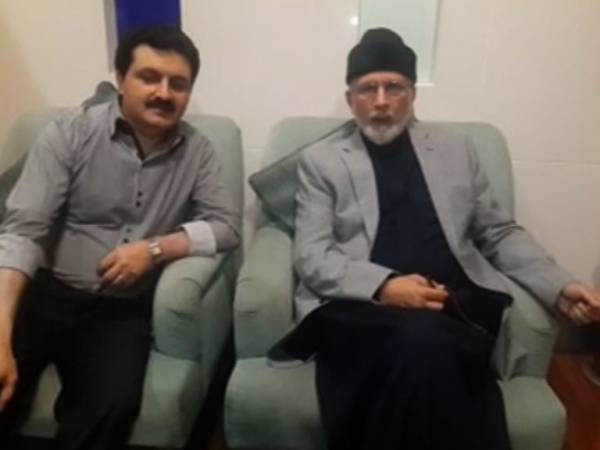 DUBAI: Having flown from London after a brief stay, the plane carrying Minhaj-ul-Quran International patron-in-chief Dr. Tahir-ul-Qadri has landed in Dubai; after three-hour stay, he will leave for Pakistan, SAMAA reported Monday.

Dr. Qadri is a renowned Pakistani religious scholar who shot to fame after he penned down a 600-page fatwa against terrorism. He is scheduled to return to Pakistan on Monday morning to lead mass protests in order to bring about a peaceful revolution to oust Prime Minister Nawaz Sharif.

Tahirul Qadri made headlines last year when he led mass rallies in the run up to May 11 general elections, demanding electoral reforms so that formation of a government with honest people, could be ensured.

Soon after Pakistan Army announced Zarb-e-Azb Operation against extremists in North Waziristan Agency, Dr. Tahir-ul-Qadri was the first figure who came forward in support of the military offensive against the terrorists.

In a Twitter post issued on the eve of his comeback, Qadri said: “I am coming to support our Pak(istani) army in their fight against militants.”

The PML-N government has banned public gatherings and processions by imposing section-144 in Rawalpindi where the main Benazir Bhutto International Airport is located.

Dr. Qadri is expected to land in Pakistan at 7am this morning.

There are various unconfirmed reports in the air that Dr. Qadri’s plane could be diverted to any other city. There are also reports that he might be forced to take a helicopter to reach his residence in Lahore where he might be house-arrested.

Terrorized by the idea of him bringing about the revolution, the authorities might block cellular services in Rawalpindi and Islamabad—a tactic usually employed to prevent militants from staging attacks or protesters from coordinating their actions.

It should be mentioned here that on Tuesday (June 17), police, in thousands, arrived moments after midnight at Minhaj-ul-Quran International Secretariat and Dr. Qadri’s residence to remove security fence. Instead, police force launched an armed attack killing several PAT workers and injuring over 100 others with gunshot wounds.

In a press release, the PAT said his flight might be diverted to Lahore or Sialkot from Islamabad, but that could not be independently confirmed.

“I am coming to Pakistan to eliminate terrorism, bring peace, true democracy and social economic justice to the poor,” Qadri said before boarding his flight in London. –SAMAA/ REUTERS