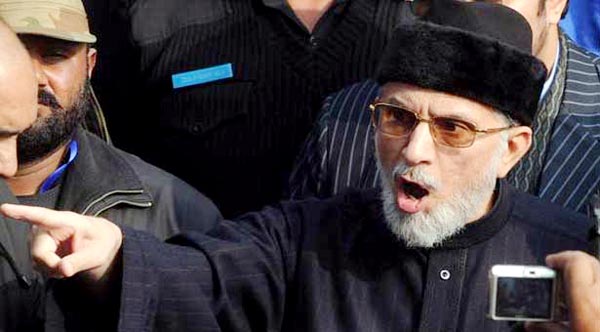 LAHORE: Pakistan Awami Tehreek (PAT) leader, Dr Tahir-ul-Qadri Monday said the campaign for revolution has been launched today and the day is not too far when the world will see a revolution in Pakistan.

“I will soon announce the date for waging a revolution in the country,” Dr Qadri told the workers and supporters who had gathered outside Minhajul Quran Secretariat to welcome their leader who arrived in Pakistan this morning.

He accused Prime Minister Nawaz Shaif and Punjab Chief Minister Shahbaz Sharif of making a failed attempt to hijack (his plane) and thanked Allah Almighty for saving his life. “There is no bigger terrorist than Nawaz Sharif and Shahbaz Sharif,” he snapped.

“I have no lust for anything. I am here to fight the war for the rights of women, youths, labourers, tormented sisters and mothers of Pakistan,” claimed Dr Tahir-ul-Qadri.

He said all his luggage from Canada was in transit. “I haven’t left even a single pair of shoes in Canada. I am here to stay till we achieve our goal,” he added.

“Now the ball is in the courts of the nation and the media,” he said.

He also thanked and congratulated the representatives of print and electronic media for covering the developments over the past week and showing the true picture to the nation.

“The plunderers will try to flee the country. But I won’t let them. I will put them behind bars and make them accountable for every looted penny,” vowed Dr Qadri.

Earlier, he visited the injured party workers at Jinnah Hospital Lahore. He was accompanied by Governor Punjab Chaudhry Mohammad Sarwar.

Tahir-ul-Qadri was to land in Islamabad this morning and was going to travel by road to Lahore. Due to security reasons the government diverted his plane to Lahore.

Following a five hour long stand-off during which the PAT chief laid down his demands he finally agreed to disembark on the condition that Governor Punjab Chaudhry Sarwar would travel with him in his car while his private security personnel would be on guard.

Speaking to journalists at the hospital, Qadri said, he has returned to Pakistan as promised. He condemned the government’s crackdown against his party workers who were tear-gassed and baton-charged.