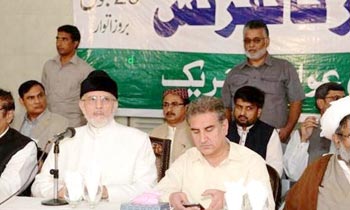 “Shahbaz Sharif is directly responsible for the bloodshed and terrorism, he should resign immediately from his office,” said a joint declaration, announced after the APC, which was attended by the leadership of different political and religio-political parties, including the Pakistan Tehreek-e-Insaf (PTI), Pakistan Muslim League-Quaid (PML-Q), Muttahida Qaumi Movement (MQM), Jamaat-e-Islami (JI), Majlis-i-Wahdat-i-Muslimeen (MWM), Awami Muslim League (AML), All Pakistan Muslim League (APML) and others, who held the view that resignation of Rana Sanaullah Khan was not enough as he had only been made a scapegoat. They also demanded that if the chief minister did not resign, the president of Pakistan should exercise his powers and dismiss him.

In the five-point charter of demands, the APC also called for a fair probe into the Model Town incident, formation of a commission comprising three judges of the Supreme Court. It was also demanded that the commission comprising judges with clean reputation should head the proposed commission and must have the authority to summon anyone, including the sitting prime minister, federal ministers and Punjab chief minister. It was also demanded that for a fair probe, an inquiry committee comprising officials of good reputation be constituted.

Dr Tahirul Qadri said on the occasion the barriers outside the MQI Secretariat were not installed by them but on the court orders following the issuance of a fatwa by him against terrorism. He said as long as the Punjab CM did not resign, no fair probe was expected and he must resign with immediate effect. He also said duality in the stance of the Punjab government could well be assessed from the fact that Rana Sanaullah Khan, who initially claimed that there were arms and ammunition in the MQI Secretariat, later himself withdrew this allegation.

Shah Mehmood Qureshi, Senior Vice Chairman of PTI, in his address said how could one expect justice when the demand by aggrieved persons to register an FIR of this incident was not fulfilled. He also said the Model Town incident had posed a serious question mark on the role of different institutions which were facing a decline adding the incident of June 17 had written a dark chapter of history, which was highly condemnable.

Ch Shujaat Hussain said, on the one hand, our armed forces were busy in the operation against terrorists and, on the other hand, state terrorists had started “Zarb-e-Ghazb” on June 17 in Model Town, Lahore. If this was not stopped, then nobody would be spared of the rulers’ wrath. He said the worst kind of terrorism was witnessed against innocent people on June 16 and 17 when the police raided the secretariat to remove the barriers and 14 people were brutally murdered.

Shujaat also said it was food for thought for all the political parties that the manner in which the height of intolerance in politics was achieved and a new culture of political terrorism through state institutions was introduced. He also said if this was not stopped forthwith, then any ruler would silence forever the voice raised against him.

He said ill-intention of the Punjab government would be judged from the fact that the barriers, for whose removal violence and bloodshed was committed, were placed again after a few days but who would bring those innocent persons who were murdered in the name of removal of barriers.

He claimed it was his faith that bodies of the martyrs would continue haunting the N-League. He said on this great tragedy, the stance of the PML-Q was that irrespective of whether it was one or 100-member commission, the inheritor of Jallianwala Bagh’s General Dyer “Qaatel-e-A’ala” Shahbaz Sharif should resign and join the investigation so that demands of law and justice could be met, all civil and police employees responsible for this tragedy should be suspended so that they could not exercise their influence anywhere and all accused should be brought in the ambit of law. “If they were let off today, then in our political culture nobody would be safe.”

He said if we did not adopt a strong stand today and did not take a decision unanimously against the accused of state terrorism, then nobody would be able to stop state terrorism in future nor anyone would be safe.

Pervaiz Elahi said participation of leaders from Balochistan, KP and Sindh in the APC was reflective of great concern which prevailed throughout the country over the brutal Model Town tragedy. He said even after the killing of so many innocent persons, Minhajul Quran’s FIR was not being registered so far and as such what to talk about a joint investigation at this stage. He said without the resignation of Shahbaz Sharif, proper investigation was not possible. “With him present as the chief minister, who will give evidence against him?”

Sheikh Rashid Ahmed, chairman of the AML, in his address said the CM Punjab remained very active in suspending a Wasa official but, on the other hand, 15 people had been killed but Shahbaz Sharif expressed ignorance. He said the PML-N vision revolves around Ziauddin Butt and Gullu Butt type of people adding those who were saying that the action was not planned were wrong.

Ahmed Raza Kasuri, the central leader of APML, said on the occasion four years after the registration of an FIR on his request, a prime minister was hanged adding he was seeing a similar fate for the elements behind this tragedy.