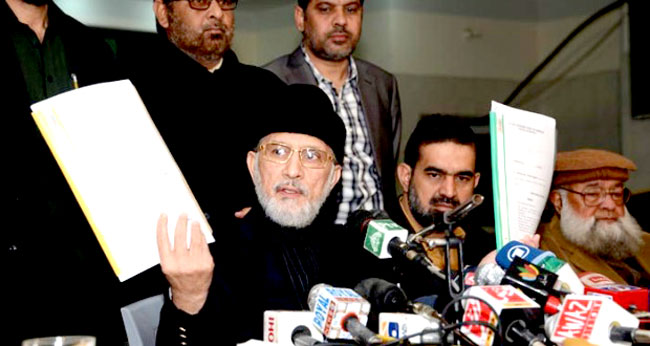 NEW YORK - Pakistan Awami Tehreek (PAT) Chairman Dr Tahirul Qadri has said that illegally constituted Election Commissions of Pakistan (ECP) is mother of all evils and problems in Pakistan, Pakistan tribune reported. Talking to different groups of expatriates in New York on Tuesday, Qadri said that “London Plan” orchestrated by ruling Pakistan Muslim League-Nawaz (PML-N) and Pakistan Peoples to enforce selective reforms in ECP now stands exposed before the nation. Dr Qadri maintained that Pakistan cannot progress to its potential without enforcing Article 213 and Article 218 of the constitution. Holding of free and fair elections in the country is key to unlock economic potential of Pakistan, he added. Referring to his long march in December 2011, PAT Chairman said that he had pinned down the election flaws well before election but his recommendations were not taken seriously. Qadri, undoubtedly most accomplished orator of the country said that independent election commission is heart of democratic system, if the heart fails to work properly than several illnesses overcome the body. He further added that in democracy, smooth functioning of governments largely depends upon a powerful and independent election commission. Taking stock of the current situation, Tahir-ul-Qadri noted that even today ECP is working without a functional head and present members work as per their sweet will. Qadri once again reiterated his demand that all members and provincial heads of election commission should resign to pave way for constitution of new setup with the consensus of all the political stakeholders. With current setup, ECP can only be a stumbling stone in way of true democracy. Traditional politicians cannot afford a free and independent election authority, he concluded. Tahir-ul-Qadri won a seat in National Assembly in 2002 general election from Lahore. Later on, refusing to be part of current political setup he resigned from National Assembly seat and migrated to Canada to pursue his research in Islamic teachings.