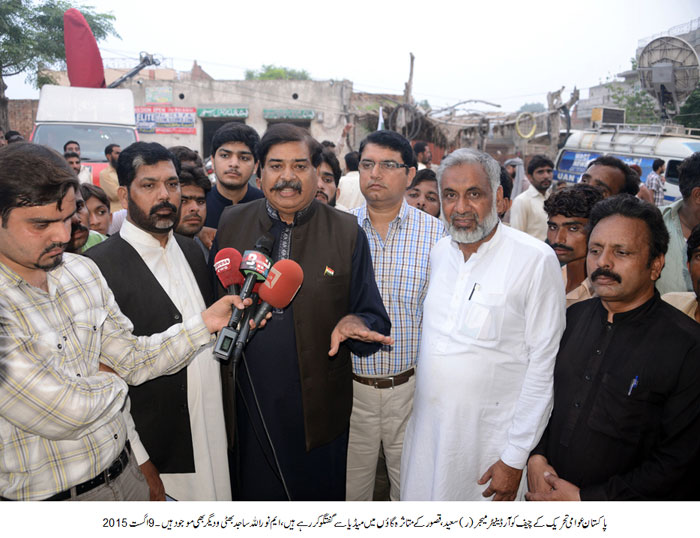 On the instructions of PAT Chairman Dr Muhammad Tahir-ul-Qadri, a delegation of the senior party leaders visited the affected village where heart-rending incident of rapes of innocent children took place. They strongly condemned the incident of rape and demanded that it should be transferred to the military court for trial. They were of the view that the Punjab government miserably failed in securing the life and honour of the masses. Hence, the security of the province should be handed over to the Rangers. They said that the Chief Minister showed his indifference by not meeting the affected families even after the passage of 48 hours since the scandal came to surface.

Talking to the media, the PAT leaders said that this brutality was being committed for last six years and the honour of the nation’s children was being violated but the police sold its conscience like before by patronizing the horrible crime. They said that in line with its traditions, the Punjab police sided with the oppressor instead of those who were wronged. They said that even before the process of investigation started, the Punjab Law Minister Rana Sanaullah and the District Police Station Kasur tried to hush up this heinous crime by describing it as a feud over the land. They said that it has become clear in the aftermath of their stance that the Punjab Government would not let the justice be dispensed in this case of huge public importance. They demanded that this incident of terrorism should be sent to the military court and all those officers who were posted in this area of Kasur during last six years should be included in the investigation.

Major (r ) Muhammad Saeed, while speaking on the occasion, said that if the Punjab police can become a complainant in the Model Town tragedy case, why did the District Police Officer threw dust in the eyes of law and the affected families by making announcements on the loud speakers in the area instead of registering an FIR on his own? He said that it is unfortunate that the PML-N, which came into power on the basis of its claim to have mandate of the masses, is playing the role of a police tout , whereas the latter has become the body guard of the rulers instead of becoming servant of the masses.

President of PAT District Kasur Dr Yousuf Arain condemned the incident in the strongest possible words and said that a number of tragedies that took place under the rule of Punjab Chief Minister Shahbaz Sharif have proven his incompetence. He said that the Chief Minister should tender his resignation over such horrible incidents, which have become a routine affair in Punjab.

Central Secretary Information M. Nooruallh said that the Punjab Chief Minister has been spending the wealth of the provinces on metro buses, roads and bridges instead of using it to ensure security of life and honour of the masses. He said that the PML-N is the tout of the police whereas the latter has become the personal servant of the rulers. He said that if the Rangers can carry out operation in Sindh to flush out crime, why can it not be allowed to do the same here in Punjab, which is awash with crimes of various categories? He said that if the Punjab Chief Minister is so proud of his good governance and popularity, he should travel his way to the affected village of Hussainwala by car instead of helicopter, he will know the reality of his popularity.

Sajid Bhatti said that since the day the PML-N has come into power, one scandal after the other has been taking place every day. He reminded that it was during the incumbency of the same government that Kot Radha Kishan and Bahmani wala tragedies took place and now these crimes have been topped by the most gruesome tragedy of our times. He said that the government keeps an eye on its political opponents with a view to suppressing them but the honour of the children, both male and female, were dishonoured for six years and the Punjab government and the police feigned ignorance by turning a blind eye to this tragedy.