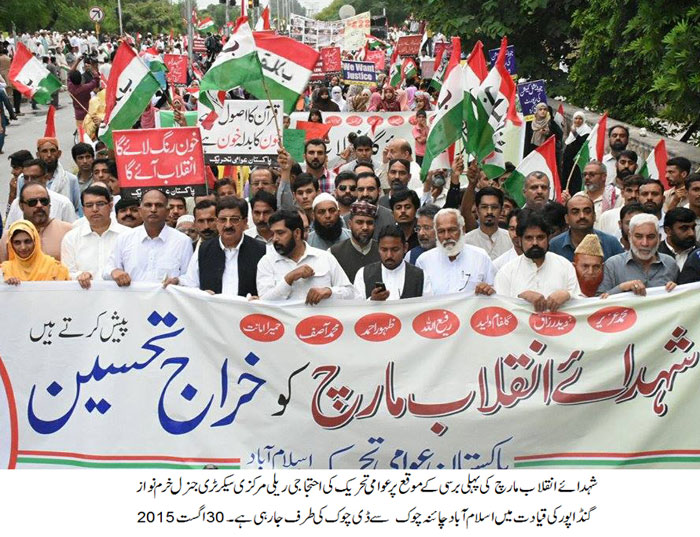 In his message to the participants of the PAT rally held to mark the first anniversary of martyrs of Islamabad tragedy, PAT Chairman Dr Muhammad Tahir-ul-Qadri has said that we would continue to wage a struggle against the oppressive rulers and the corrupt system till the last drop of our blood to seek justice for the martyrs of the Model Town and the revolution march tragedies. He said that the PAT workers have neither got tired nor given in. He said that increasing disappointment of the people with the non-delivering system was at the back of the sit-in. He said that the rulers did the most brazen thing by raising baseless allegations against the army. He said that the awareness created by the sit-in is producing results in the form of tightening of noose around the neck of the economic terrorists.

Dr Qadri, whose message was read out by PAT Northern Punjab President Brig. (r ) Mushtaq Ahmad, further said that we came to Islamabad on August 14 to seek justice for the martyrs of the Model Town tragedy but the oppressive rulers, corrupt system and the fake democracy handed over more dead bodies. He said that the days of the rulers in power have been number, adding that they would not even get the chance to flee the country this time round.

The thousands of the workers from the twin cities of Islamabad and Rawalpindi participated in the rally organized to protest the government brutalities unleashed on the innocent workers on the intervening night of August 30 and 31 in 2014. A number of workers were martyred and the hundreds of them sustained serious injuries as a result of the police torture, firing and shelling. The PAT rally was jointly led by Khurram Nawaz Gandapur, Brig (r ) Mushtaq Ahmad, Maj. (r ) Muhammad Saeed, Sajid Bhatti, Qazi Faiz, Umar Riaz Abbasi, and Sardar Mansoor Khan. The participants of the rally chanted slogans against the government, and the corrupt system. They demanded that the Model Town Judicial Commission report of Justice Ali Bakar Najfi should be made public and those nominated in the FIR lodged by the PAT should be apprehended and legal proceedings initiated against them.

Ibrar Raza Advocate, Sultan Naeem Kayani, Ishtiaq Mir, Aaqil Satti, Farooq Butt, Hassan Malik, Razia Naveed, Ayesha Shabbir, Qazi Shafique, Nusrat Amin, Qamar Gardezi, Waseem Khattak and Nauman Karim addressed the participants of the rally. A large number of women also attended the rally. They were holding placards and banners in their hands and raising slogans against the rulers and in favour of justice for the martyrs of the Model Town and Islamabad tragedies. The workers were of the view that the prime minister, chief minister and the members of their cabinet are responsible for the killings of the innocent people in Model Town and Islamabad. They also demanded that the trial of the Model Town case should be held in the military court. A large number of youth of PAT Youth Wings participated in the protest rally under the leadership of Mazhar Alvi.

Addressing the participants of the protest demonstration, PAT Secretary General Khurram Nawaz Gandapur said that the rulers who killed our innocent workers on June 17 in Model Town, Lahore, perpetrated violence again on the night of August 30 in which a number of workers were martyred. He said that the FIR was registered but no justice has been provided in the case. He said that the prime minister and the chief minister are responsible for the killings in Model Town and D-chowk Islamabad. He said that the rulers are a major hurdle in the way of dispensation of justice, adding as to why they are not allowing the publication of the Model Town Judicial Commission report. He said that heinous plan was hatched to shed blood of the innocent people in Islamabad on the pattern of the Model Town Lahore but senior police officers Aftab Cheema and Muhammad Ali Nekokara foiled that plan.

The PAT Secretary General said that the rulers are forcing us to protest in front of Parliament by not releasing the Model Town Judicial Commission report. He said that the PAT workers rendered supreme sacrifices for rule of law, supremacy of the Constitution, establishment of real democracy and the rights of the poor. He said that we dedicate August 30 to the names of the martyrs and workers who braved the government’s tyranny in the brave manner. He said that it was for the first time in history that the workers and the leadership continued to protect each other when faced with the government brutality. He said that Dr Tahir-ul-Qadri was protector of the workers while the workers protected Dr Qadri.

Khurram Nawaz Gandapur expressed these views while addressing the participants of the symbolic sit-in and the rally held under the banner of the PAT to mark the first anniversary of martyrs of Islamabad. He said that the oppressive system would not change with the fall of the wickets, adding that sacrifices would have to be rendered for this purpose. He asked the government to release the report of Justice Baqar Najafi-led Commission within 15 days, failing which the PAT would be in front of the Parliament House again. He said that the prime minister had left the Prime Minister House on the intervening night of August 30 and 31, adding that making one’s escape good is in line with his old tradition when confronted with the crunch situations.

The PAT Secretary General said that the martyrs and the workers of the party also protected Imran Khan. He said that our workers faced the police shelling, firing and tear-gassing but did not flinch from the protection of the PTI Chairman Imran Khan. He said that we would continue our struggle till the last breath of our lives to seek justice for the martyrs of Model Town and Islamabad tragedies. He said that we would not let the killers consign the FIRs into the dustbin of history. He said that the PML-N’s power is at the mercy of Dr Tahir-ul-Qadri’s one call of the long march. He asked the rulers of the Punjab to answer as to why they are not allowing the publication of the Model Town Judicial Commission report. He said that violence was perpetrated on the workers on the orders of the prime minister on the intervening night of August 30 and 31. He said that the FIRs were registered on the court orders but no investigation has been carried out as yet.

He said that the assemblies are fake, as they came into being as a result of the fraudulent elections presided over by an equally controversial Election Commission. He asked PPP leader Khursheed Shah to state on oath whether the appointment of the provincial members of the Election Commission was carried out in accordance with the mechanism mentioned in the Constitution. He said that we held symbolic protest and the sit-in today, adding that our next protest and the sit-in will be decisive.