Veil not a hurdle in the way of woman’s progress: Farah Naz 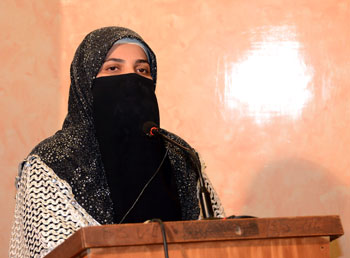 Mrs. Farah Naz, the central President of Minhaj-ul-Quran Women League, has said that Islam is a peaceful religion and a complete conduct of life. She said that man can fulfil all of his requirements in the light of Islam. She said that women were deprived of social status in various societies and civilizations before the advent of Islam. She further said that women enjoyed lower status in cultures and civilizations in the age of ignorance.

Mrs. Farah Naz said that it was Islam that upheld the banner of rights and security of the women and presented a clear stance on the status of women and dignity and respect of women. She said that Islam does approve of the women’s right to beautify themselves but it strictly forbids them to expose and exhibit themselves. She said that rise of nations is closely associated with woman’s chastity and the man’s honour. She said that there is a morality of every religion and Islam’s morality is virtue and piety. She said that veil is the commandment of Allah Almighty, which saves one from evil sight and wrongdoing.

She said that the purpose of the ceremonies is not to propagate the use of veil but to highlight its usefulness and importance. She said that the veil is becoming popular throughout the world, adding that veil retains a distinct status as civilizational symbols in the Muslim world. She asked the women to follow the life and teachings of the mothers of the believers. She said that veil is right of a woman and not a sign of oppression and retrogression.