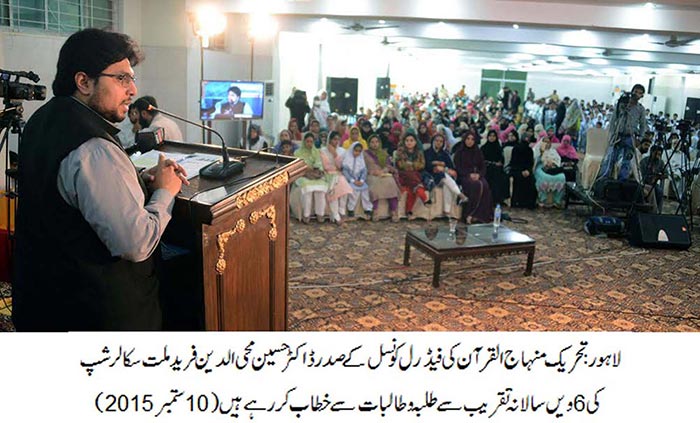 Addressing the 6th annual Farid-e-Millat scholarship ceremony, Dr Hussain Mohi-ud-Din Qadri, president of MQI Federal Council, has said that Minhaj Education Society (MES) is the only institution engaged in imparting affordable, purposeful and standardized education to the people in the country. He said that more than 1.5 lacs students are studying in the schools and colleges under the MES where ten thousand highly educated teachers are equipping them with modern education. He said that the Minhaj Education Society is producing Islamic scholars, not Imams of the Mosques, under the vision of Dr Muhammad Tahir-ul-Qadri. He said that we are establishing quality educational institutions in such far-off areas where commercial educational groups shied away from the task due to prospect of limited fees. He said that there should be uniform curriculum up to intermediate throughout the country. He said that today’s intellectual speaks more, thinks less, writes more and reads less and it has the same effects on the society.

Faiz-ur-Rehman Durrani, Brig. (r ) Iqbal Khan, Sahibzada Mahmood Faizi, Khalid Mahmood Sultan, Sheikh Muhammad Aslam, and Haji Muhammad Hanif were also present on the occasion. The scholarships of worth Rs. one million were distributed among 120 bright students of dozens of schools from across the country in the ceremony. Shields and appreciation certificates were given to the high-performing teachers. The children demonstrated their creative skills by presenting tableau show, national anthems, and various skits. The participants of the ceremony gave generous applause to the students. The parents of the children paid rich tributes to Dr Tahir-ul-Qadri for provision of quality but affordable education in the backward areas and prayed for his speedy recovery and long life.

Dr Hussain Mohi-ud-Din Qadri said that quantity of education has increased but its quality has decreased. He said we need education which can create a sense of national honour among the people. He said that the Quaid-e-Azam had sincerity, devotion and a sense of purpose which resulted in the form of independence for millions of Muslims.

Dr Hussain said in his keynote address that none of our schools or colleges was closed during the sit-in, whereas the fact remains that there are more than 1.5 lacs students and more than ten thousand teachers in these educational institutions. He said that these were the downtrodden sections of society who took part in the struggle against the oppressive system. He said that the purpose of education is not to accumulate degrees but to contribute one’s bit in nation building and service of humanity. He said that our teachers and educational institutions were far less in number today compared to 500 years ago. He said that it is next to impossible to look for the likes of Ghazali, Bu Ali Sina, Razi and Maulana Rum because the process of teaching and imparting of knowledge has been associated with worldly perks and privileges, whereas the Muslims of 500 years ago were dedicated to acquisition of knowledge owing to their passion to serve the humanity. He said that we would have to return to the Mustafvi mission of sincerity and service.

Dr Hussain Mohi-ud-Din Qadri said that since the day higher education has become an instrument of top jobs and worldly progress, restlessness has increased in society and today’s civilized world is presenting the picture of chaos. He said that even today thousands of books are written which have a life of a few weeks and months, whereas we still give references of the books authored by our forefathers and make them part of our study. He said that the Muslim world will have to return to research and knowledge to regain its lost glory. 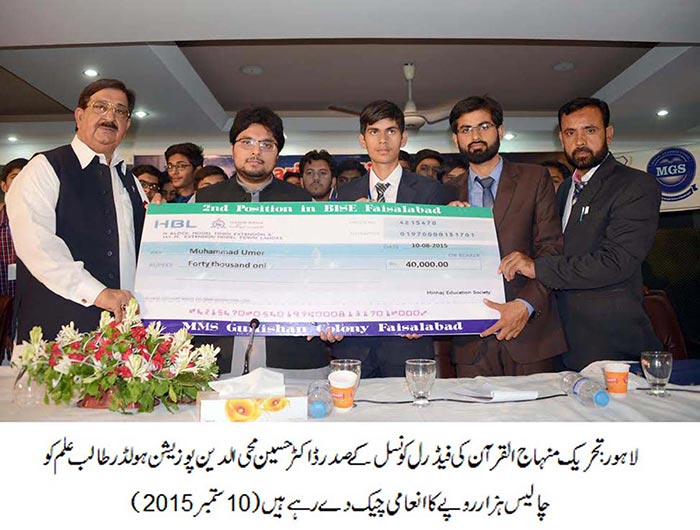 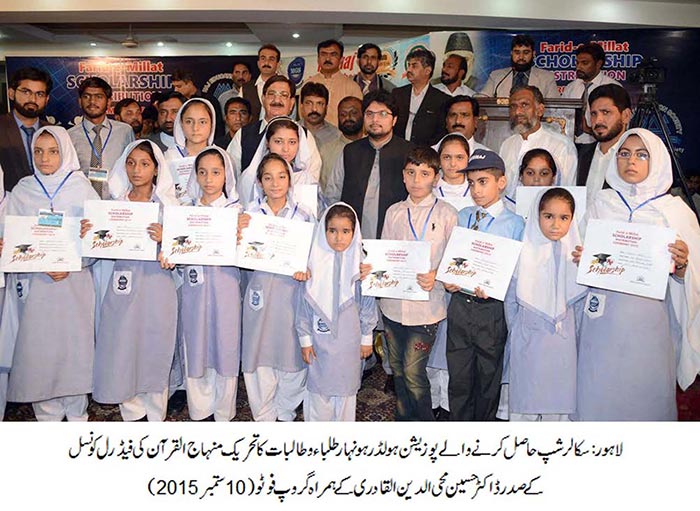