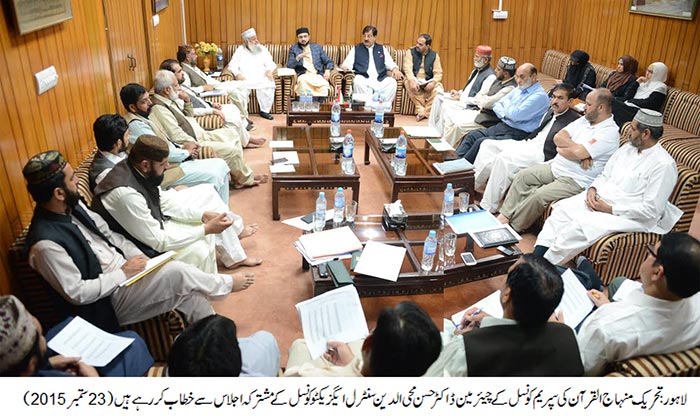 Chairman of MQI Supreme Council, Dr Hassan Mohi-ud-Din Qadri, has demanded that it is the government’s responsibility to stop the defunct organizations from running campaigns for collection of sacrificed animals’ skins on the social media in line with the provisions of the National Action Plan. He said that the news regarding the banned outfits’ campaigns to collect skins under changed names is worrisome. He said that instead of stopping funds for NECTA, the government should attend to stopping the funding lines for the banned organizations. He said that the illegal practice of harassing the institutions and social organizations on political grounds working for promotion of peace should be stopped. He asked the Interior Ministry to upload the list of defunct organizations on its website. He warned that as long as the funding for the terrorist organizations continues, the efforts for elimination of terrorism will not be fruitful.

Dr Hassan Mohi-ud-Din Qadri said that stopping the banned organizations from collecting skins will be the first test of the government. He said that it would not be wise to depend on the police for this purpose, adding that the services of the Rangers should also be requisitioned. He said that the time to eliminate organizations that have been collecting skins under the changed names in the name of welfare has arrived. He said that the workers of the PAT and MQI are playing their national duty of promoting peace, love and interfaith dialogue in line with Dr Tahir-ul-Qadri’s vision of ‘Zarb-e-Ilm’. He said that the terrorists were severely damaged as a result of the Operation Zarb-e-Azb, adding that the movement of knowledge will have to be launched to eradicate them intellectually.

A resolution adopted in the meeting asked the government to stop the social media campaign of the banned organizations and make fool-proof security arrangements on the Eid day. It also asked the government to employ all available resources for protection of life and property of people from threats of terrorism on the basis of intelligence reports. Final shape was given to the biggest collective sacrifice in Lahore in the meeting.

Minhaj Welfare Foundation, in its report to the CWC meeting, said that there will be four thousand collective sacrifices throughout the country under the banner of MQI during this Eid-ul-Azha. It was informed that arrangements have been completed to ensure the distribution of meat to the deserving in the shortest possible time.