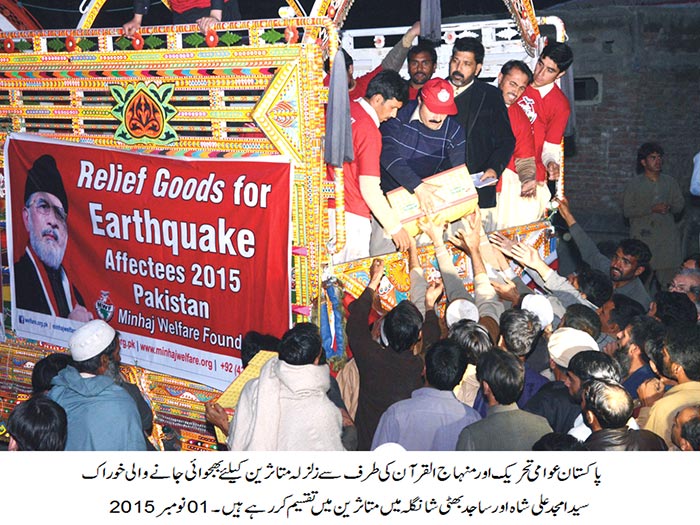 Speaking on the occasion, Syed Amjad Ali Shah said that volunteers of MWF are identifying such children who are totally helpless and have no parents or other support system. He said that all such children will be admitted to Orphan Care Home, ‘Aagosh’, a flagship project of Minhaj Welfare Foundation where they would have quality residential, food and educational facilities for free. He said that more than 200 volunteers of MWF are taking part in relief activities in the affected areas. He asked the people of KPK not to consider themselves all alone in this hour of immense trial, adding that the people of Pakistan stand in solidarity with them from Karachi to FATA.

MWF Director also appealed to the masses to take effective part in the relief activities and contribute their bit in rehabilitation of their brothers and sisters.

#MWFreliefefforts in the Pakistan (2015) #Earthquake - distribution of relief goods in #KPK to 1000s of families. pic.twitter.com/fDfHSs2sgp

Minhaj Welfare Foundation has successully recieved your donaions, and have prepared the much needed Emergency Aid Packs...