‘Tehreek-e-Qisas’ to be launched against culprits of Model Town Massacre: Dr Tahir-ul-Qadri 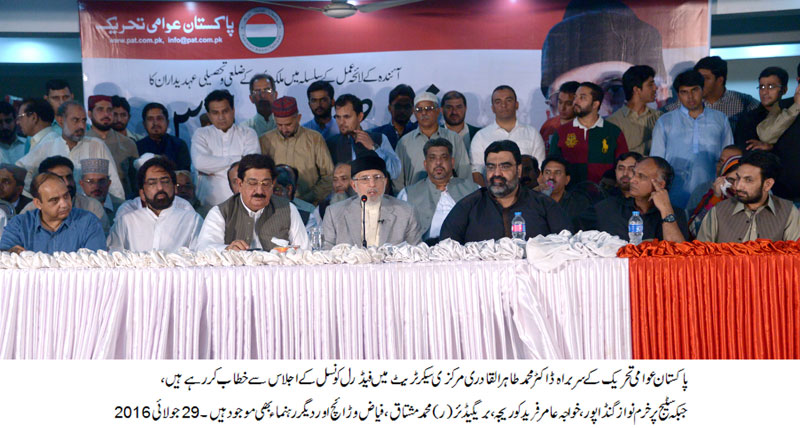 LAHORE: (29-07-16) The Federal Council of the Pakistan Awami Tehreek on Friday has through a resolution given full authority to its chairman Dr. Tahir-ul-Qadri to start a ‘Tehreek-e-Qisas’ to ensure that the martyrs of the Model Town Massacre are provided justice.

The resolution further stated that the First Information Report of the Model Town incident was registered on the intervention of the Army Chief and now the Army Chief must ensure that justice is served in this case and culprits are sent to jail.

The resolution further stated that the PAT Chief is authorized to decide the date and future line of action for the ‘Tehreek-e-Qisas’ after consultation with opposition leaders in the July 31 Consultative Conference to be held at the PAT Secretariat.

Addressing a press conference after the Federal Council meeting Dr. Tahir-ul-Qadri said that to end this reign of corruption, terrorism and lawlessness it is imperative to end the ‘Aal-e-Sharif’ era. He advised the Sharifs to stay at Jati Umra and when their bad time comes they can easily shift to India, safe zone for the Sharifs, through the Wahga Border which is just a ten minute drive from their Raiwind residence.

The PAT Chief gave the Army Chief the name of ‘Mard-e-Aheen’ for conducting a successful operation against terrorists and extremists and for bringing peace to the country. He said PAT respects the point of view of the army Chief that he wants to break the nexus of corruption and terrorism. He said the time has come to take concrete measures to eliminate these social evils from the society.

Dr. Tahir-ul-Qadri said that the time has come for the people of the country to decide that do they want to side with these corrupt rulers or do they want peace, tranquility, justice and fair play in the country. He said the rule of the Sharifs has become a serious threat for the security of the country and need to be eliminated. He said the Sharifs fear only the PAT workers and leaders as they know that the PAT workers are fearless and cannot be purchased at any cost. He said that a protest and only a protest is the solution to these ills of the Sharifs. And this announcement will be made after consulting leaders of the opposition parties in the July 31 meeting.

The Federal Council of the Pakistan Awami Tehreek in its meeting voiced concern over the kidnapping of children in Lahore. It also demanded end to unscheduled load shedding and inflation. The meeting protested the increase in loans being taken by the government from domestic and foreign agencies. The meeting also supported the demands of the nurses, agriculturalists, clerks and teachers.