Corrupt have joined hands and working against the country: Dr. Tahir-ul-Qadri 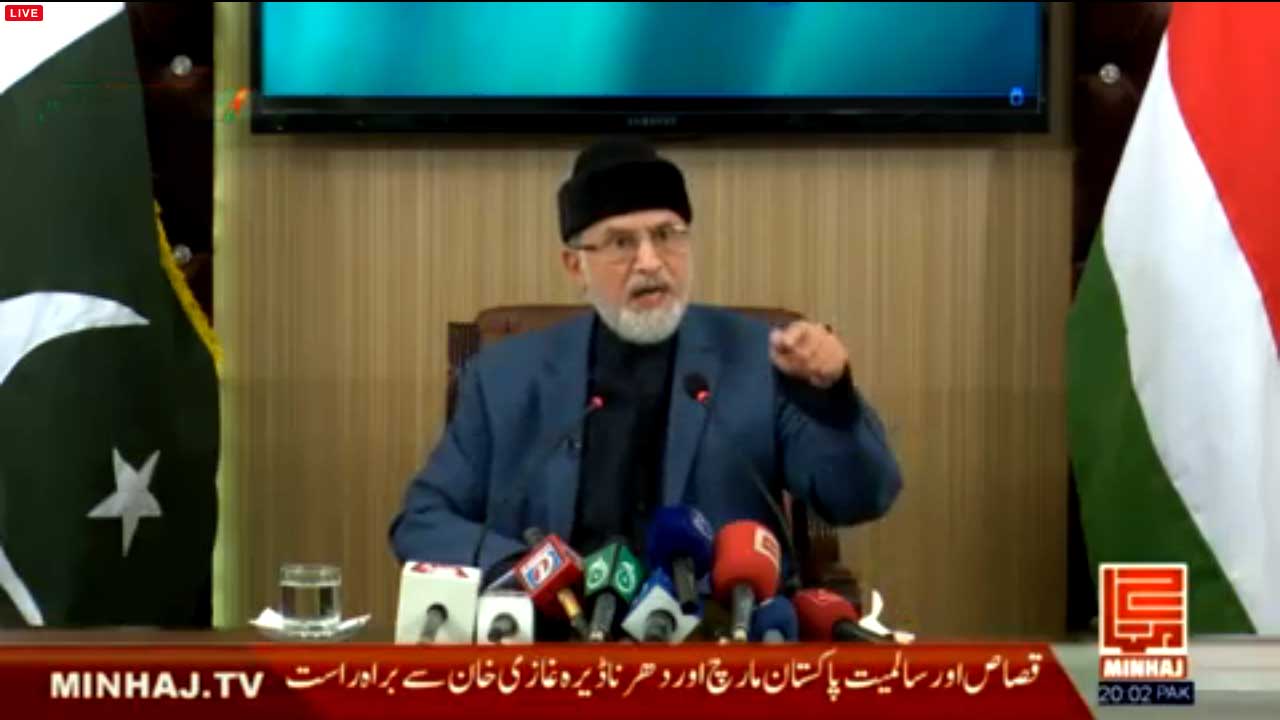 LAHORE: The corrupt forces in the country have joined hands and forces and are now working against the very existence of Pakistan. This was stated by chairman of Pakistan Awami Tehreek Dr. Tahir-ul-Qadri while addressing the Qisas rally and sit-in held in Dera Ghazi Khan on Thursday, via video link from Lahore.

He said it seems as if though the speech was written in Islamabad and sent to London, from where it was read out and the anti-state activities and arson was witnessed in Karachi. He said if the evidence given to the British Government is creditable than why the Pakistani government has not registered a treason case as yet.

The PAT Chief repeated his allegation that the prime minister, Punjab chief minister and his cabinet are responsible for the Model Town killings and PAT will not rest until Qisas is paid in this case. He said the person who was bringing and delivering messages between the two Sharif brothers, Dr. Tauqeer has been awarded and made Pakistan’s envoy to Geneva. The person who ordered the firing SP Salman has been sent abroard, the DIG Abdul Jabbar, who oversaw the whole operation has been granted two years leaves and sent abroad, while the third main culprit SP Umar Riaz Cheema has also been given two years leaves and he has also disappeared. He said the rest are all set to either go abroad or disappear. He said even after all this does one need to understand who was behind the Model Town incident.

Dr. Tahir-ul-Qadri said that in the month of Independence several attacks have been witnessed on the parliament, inside and outside, but we have not seen any suo moto action by the superior court. He said the same mindset that has been witnessed in the Quetta attack is behind the ransacking and arson in Karachi. He said all this is being done to put extra pressure on the Pakistan Army, incite the public and take away the media attention from important national issues so as to give relief to the under pressure Sharif Government, which cannot find a way out of the Panama Leaks issue and the Model Town killings.

The PAT Chief said that the PM is only offering lip-service and has failed to present any concrete measures for the national security. All the PM has done is present resolutions and issue press statements. He said no implementation has ever been seen on the orders of the PM. He said before the Karachi incidents the issues that were being discussed included the PAT Qisas movement for justice in the Model Town incident, the Panama Leaks issue, Indian Held Kashmir killings and curfew, illegal assets issue. The Nawaz government was not happy on the debates that were being held on TV channels and on the streets by the common man, stated Dr. Tahir-ul-Qadri. He said the timing is of utmost importance as the Model Town incident and the Karachi issue have a deep connection.

At the conclusion Dr. Tahir-ul-Qadri advised the police to mend its ways as the rule of the Sharifs’ is nearing its logical end. He announced Qisas movement and national solidarity sit-ins and rallies in Multan on the 27th and in Rawalpindi on the 28th.