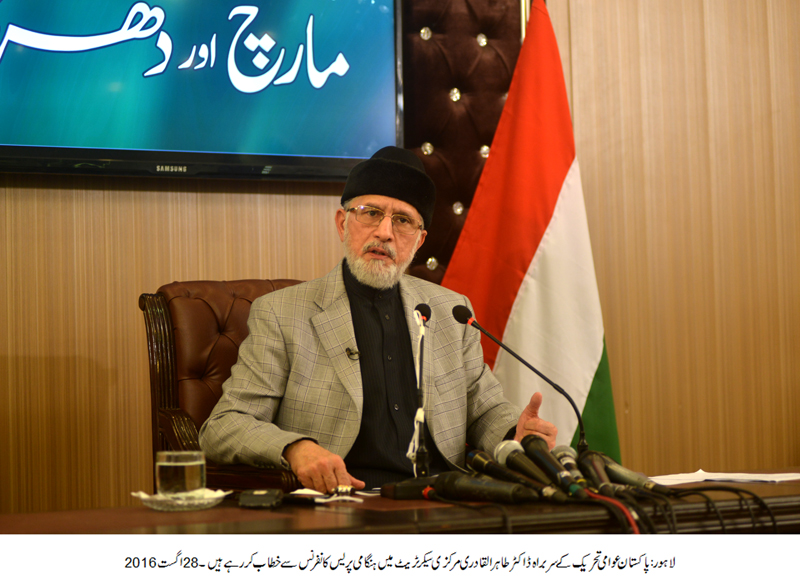 Later addressing a press conference the PAT Chairman said that now it will not be such a long phase and the Sept 03 rallies will be decisive. He said struggle will bring result and it will be a victory for all the martyrs of Model Town, Peshawar Army Public School, Quetta incident, Gulshan-e-Iqbal, Lahore incident, Wahga incident and Karachi Karsaz incident martyrs. He said now they will all get justice. He said now no poor will have to fear the rich and powerful as justice will be even-handed.

Dr. Tahir-ul-Qadri said the knowledge of the Indian spy Kulbhoshan was provided by an Indian sitting in the sugar mill owned by the Sharifs and even today over 54 Indians are employed in the mills owned by the Sharifs, who are bought from the Wahga Border and the Punjab Chief Minister greets them in the guest houses where they are housed. He said no agency in the country is allowed to question or search the guests of the Sharifs. And if anyone dares to question their presence, a long que of phone calls starts and the issue is hushed up instantly, he said.

Dr. Tahir-ul-Qadri said that we are astonished and worried that how long the institutions responsible for the national security will let this happen as everything is in their knowledge. He said under these circumstances the constitution and the state themselves are seeking justice, how can the martyrs of Model Town be given justice. He said when anyone questions the disloyalty and anti-state activities of the rulers, they start screaming the democracy is in danger and the state is in danger.

The PAT Chairman said that in Karachi a political leader openly spoke against the very existence of Pakistan and the government says they have written a letter. What kind of joke is this that the prime minister refuses to speak against that political leader and his party? The PM should openly denounce that party and its leader and impose a ban on all of them, but sadly that party is a partner of the ruling party and supports it in the National Assembly and Senate. He said the words spoken by that leader have left the country badly injured, but now on sane Pakistani can accept such words uttered against the country.

Dr. Tahir-ul-Qadri stated that our Qisas Movement is for the national solidarity, justice and against corruption, through it we mean to put an end to corruption, terrorism and extremism in the country. He said through it we will bring the Balochs sitting on mountain tops into the mainstream politics. He said the corrupt Sharifs are conspiring against the solidarity of the country and now it is not an issue for the government but it is an issue for the state to solve. He said the Qisas Movement started from the Model Town martyrs but its scope has been expanded to the entire country.

Sheikh Rashid lashed out at the Sharifs and demanded an end to the corrupt rule of the Sharifs. He requested Imran Khan and Dr. Tahir-ul-Qadri to join hands and if they do so the country will be free from the Sharifs within a week. He said that those who spoke against Pakistan have the patronage of the Sharifs. He said time is of prime importance and it should not be wasted and all the opposition parties must join forces and kick the Sharifs out. He said this movement will end only with the ouster of the present rulers.