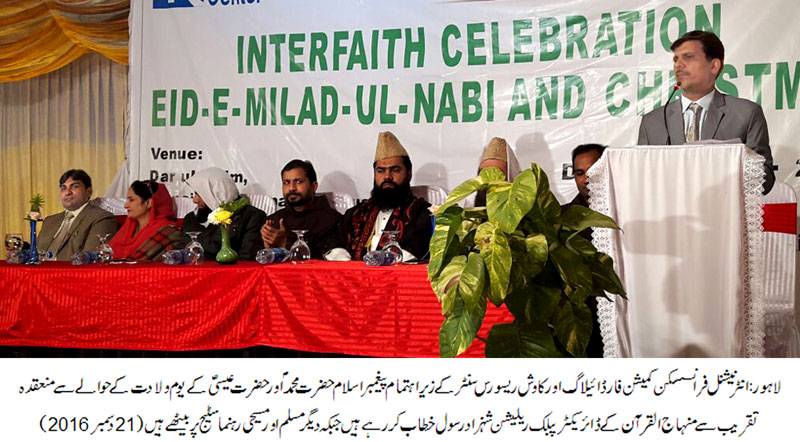 A ceremony was held to mark the birth anniversaries of the Holy Prophet (peace and blessings be upon him) and Jesus Christ under the banner of the International Commission for Dialogue and Kawish Resource Centre, which was attended by Sikh, Hindu, Christian and Muslim faith leaders in large numbers.

Shahzad Rasool Qadri, Director Public Relations of Interfaith Directorate of MQI, represented the organization on accounting of Director Sohail Ahmad Raza being away on a tour of Europe. Haji Muhammad Ishaq, Sheikh Aftab and Saqib Bhatti were other members of the MQI delegation.

Shahzad Rasool Qadri congratulated Father Dr Victor Suwera on the birth anniversary of the Holy Prophet (peace and blessings be upon him) and Jesus Christ. He said that the Holy Prophet (peace and blessings be upon him) came to the world as the Prophet of Mercy, whereas Jesus Christ is known as a great advocate of peace. He said that the whole world is facing the threat of terrorism. He said that terrorists are enemies of the whole humanity, adding that they have no religion. He said that we would have to make a resolve to stand up to terrorists and defeat the evil forces on the auspicious day.

Shahzad Rasool Qadri threw light on the services and contributions of Dr Qadri for promotion of peace, interfaith harmony and love in the world. He said that the world knows Dr Tahir-ul-Qadri as ambassador of peace. He said that Dr Qadri issued 600-page Fatwa against terrorism and suicide bombings. He also designed a curriculum to counter terrorism and promote peace.