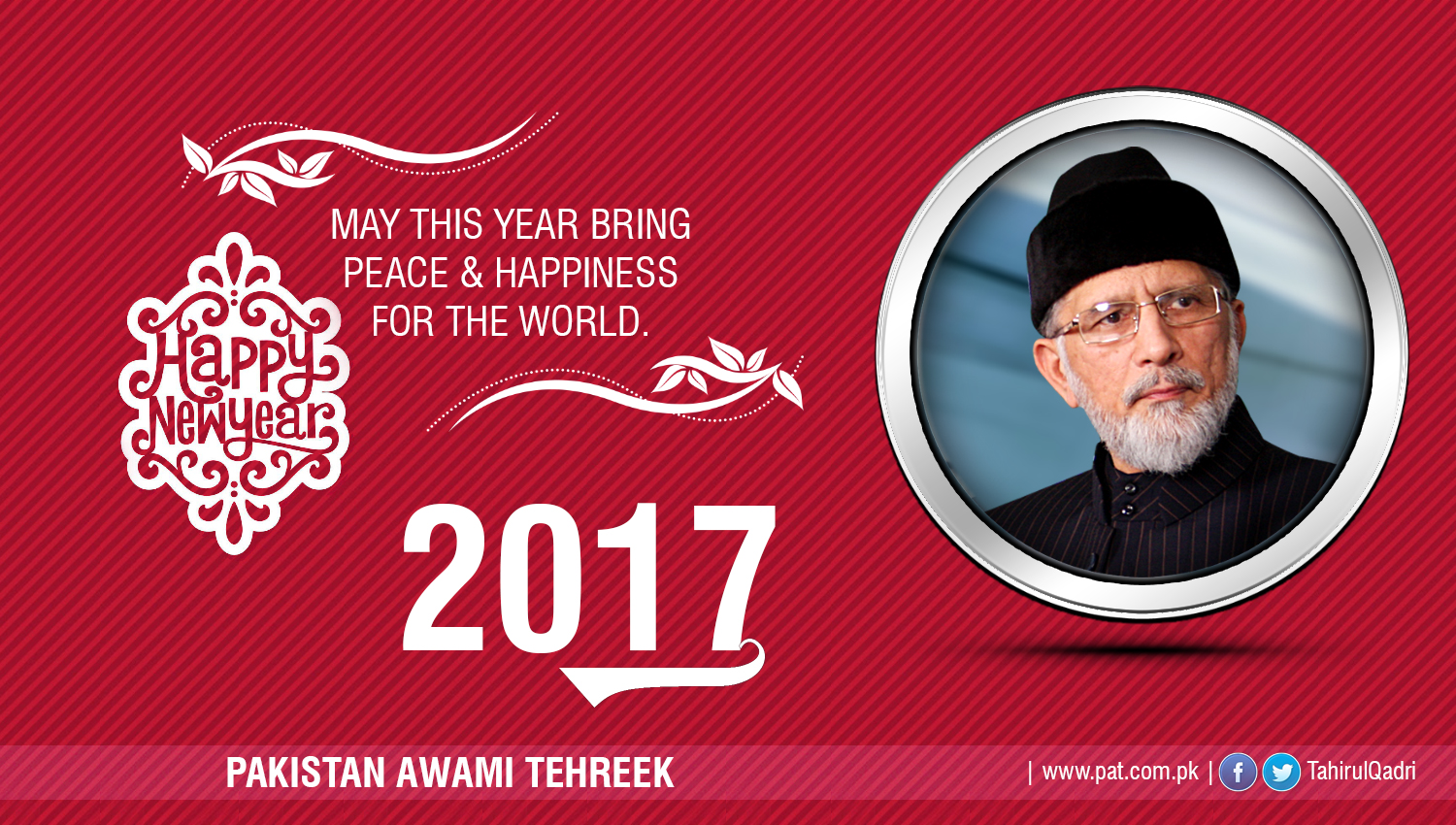 Lahore (31 Dec 2016) Founding leader of Minhaj-ul-Quran International and Pakistan Awami Tehreek, Dr Muhammad Tahir-ul-Qadri has greeted the people of Pakistan including the overseas Pakistanis in particular and the world community in general at the advent of 2017. In his felicitation message on the eve of New Year, he said that it is an occasion to review our past conduct both individually as well as collectively and make fresh resolve to make amends for our behaviors. He said that it is time to set some specific goals before us and chart out a workable strategy to translate those goals into reality. Dr Qadri said that the world had a manifest challenge to defeat all such elements who wanted to sow the seeds of mistrust, discord and misunderstandings among various cultures, civilizations and faiths. He said that as the international community was welcoming the dawn of 2017, threats to peace remained formidable with the potential to harm the spirit of diversity, inclusiveness and integration if the followers of various faiths did not come on a single platform and carve out a consensual strategy to thwart the designs of anti-peace lobbies on either side of the equation. Dr Tahir-ul-Qadri said that humanity had a shared stake in future irrespective of any discrimination, adding that secure and prosperous future of our children warranted that we rose to the challenge in a spirit of togetherness. He said that building bridges among our cultures and religions was a noble cause worthy of investment of our energies and time. He said that Minhaj-ul-Quran International And PAT would continue to work for promotion of peace, interfaith harmony and dialogue among various cultures.

Chairman of Pakistan Awami Tehreek Dr. Tahir-ul-Qadri said that the year 2016 was the worst in respect of ‘Governance. ’ In 2016 the heirs of the Model Town martyrs did not get justice. The criminals involved in the Panama Leaks did not face accountability and were not punished. Implementation on the Quetta Commission reports was not possible. The National Action Plan was sabotaged. Dawn News Leaks culprits could not be apprehended nor pin pointed. The PAT chairman said that the rulers continued to take foreign loans and in 2016 created new records of loan-taking. He said an additional 30 billion loan was taken by the rulers and the parliament remained a silent spectator. The dragon of inflation kept flying high in 2016 and the poor kept reeling under heavy prices of daily use items. It was a bitter year for the poor of the country. Prices of medicines were sky-high and were increased 5 times in the year while the price of sugar was raised 4 times. The daily use items prices saw 60 per cent increase. Oil prices saw a decrease in the international market but the fruits of that never reached the poor of the country. No culprit was punished involved in mega scandals. Punjab remained supreme in Police encounters and the Rangers were blocked to start an operation in Punjab.

He asked the workers of PAT to make a resolve to take their message of revolution to every nook and corner of the country. He said that we were committed to restore fundamental rights of people and make Pakistan the country of the Quaid-e-Azam’s ideals. Dr Tahir-ul-Qadri said that there was no denying the magnitude of the challenge but added in the same breath that even mountains moved before the human resolve. He said that time for change was ripe and it was on the workers to accelerate the process of bringing about change.