Action be taken against attackers on finality of Prophethood: Dr Tahir-ul-Qadri

A resolution adopted at ‘Uloom-ul-Hadith’ Conference attended by more than three thousand religious scholars, Mashaykh and intellectuals has said that change in the oath of office for public representatives is an organized attack on the belief in the finality of Prophethood. It demanded that all those characters responsible for this attack should be proceeded against and meted out exemplary punishment. It is not enough to withdraw the amendment in the law. Taking an action against those found to be responsible is religious, legal and national responsibility of the state institutions. If the state institutions did not fulfill this responsibility, then one can only pray for the country.

PAT Chairman Dr Muhammad Tahir-ul-Qadri presented this resolution himself which was approved unanimously by the religious scholars, and Mashaykh from all the four provinces, GB and Azad Kashmir.

In his address, Dr Tahir-ul-Qadri said that the conspiracy to change the text of the oath is connected with an agreement whereby ‘someone’ has assured ‘someone else’ that if the latter can get the former restored, he can remove a longstanding hurdle in the way of law regarding finality of Prophethood. It was also part of the bargain that if conspiracy gets exposed and causes extreme public backlash to surface, the amendment will be withdrawn silently. He said that he is urging the state institutions not to stay silent on this state of affairs.

Dr Qadri further stated that by deleting the established Islamic values regarding honesty and truthfulness from the Constitution, the teachings of Islam have been violated. He said that the Holy Prophet (SAW) was known as honest, truthful and ‘ameen’ before the conferment of Prophethood, stating that deletion of such teachings from the Constitution is unacceptable.

The Conference also strongly condemned the suicide blast on a shrine in Jhal Magsi in Balochistan. The participants prayed to Allah Almighty to rest the departed souls in peace and grant quick recovery to the injured.

A large number of women scholars also attended the Conference. 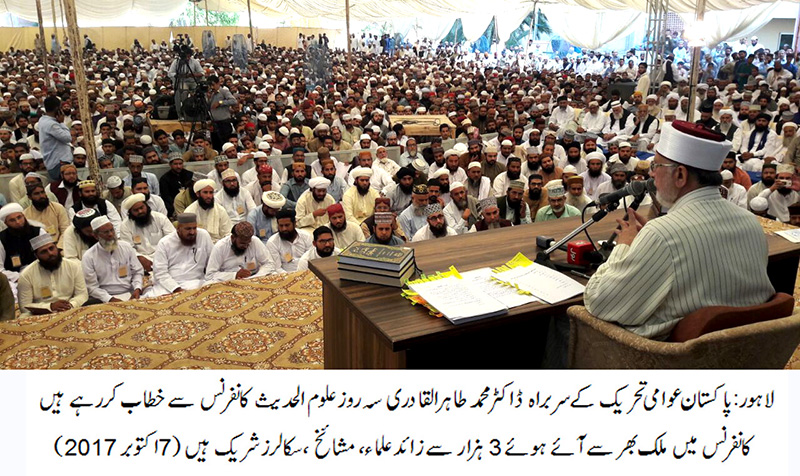