Just attended the janaza of the innocent child zainab in Kasur. I have no word to describe this barbarity and the scene was heart wrenching. May Allah Almighty save Pakistan from these rulers.#JusticeForZainab pic.twitter.com/RLKkR7sn6t

PAT Chairman Dr Muhammad Tahir-ul-Qadri led the funeral prayer for 7-year-old girl, Zainab, who was brutally killed after being abducted and abused in Kasur. Talking to the media after the funeral prayer, he said that we would avenge the the blood of Kasur martyrs like the Model Town martyrs. He said that the rulers who failed miserably in protecting the lives and properties of the people and innocent children have no justification to stay in power. They should immediately vacate their positions. He said that the district police revived the memory of Model Town tragedy by directly firing at the students who were protesting for justice for little Zainab. He said that as long as stone-hearted and cruel rulers are in positions of authority, the flower-like children will continue to be killed.

Dr Tahir-ul-Qadri said that innocent Zainab was going for a Quranic lesson. The brutes abducted and martyred her. He said that no humiliation of humanity can be graver than this. He said that the Chief Minister and his police are responsible for this incident. He welcomed the suo moto notice of the horrible incident taken by the Chief Justice Lahore High Court and said that irrespective of the influence of the perpetrators, they and their patrons should be held to account and meted out exemplary punishment for their horrific crime. He said that the Punjab chief executive and his district administration completely failed in maintaining law and order in the district Kasur and protecting the lives and properties of the residents of the city. He said that bullets were rained on the people who raised their voice for justice and resultantly more citizens were martyred and injured. He said that we strongly condemn this brutality and demand that the top officials responsible for the incident should be removed from their positions.

Dr Tahir-ul-Qadri asked Nawaz Sharif, and Shehbaz Sharif as to where their accomplices were? Why did they not come to share grief of the aggrieved family? In which holes have the rulers been hiding who failed to protect life and dignity of innocent Zainab? He prayed to Allah Almighty to bless Kasur, Lahore, Punjab and the whole country with peace and tranquility and rid the country of the cruel rulers who failed in the discharge of their basic duties.

Dr Tahir-ul-Qadri was accompanied by Dr Hassan Mohi-ud-Din Qadri, Khurram Nawaz Gandapur, Noorullah Siddiqi, Jawad Hamid, GM Malik, Fayyaz Warriach, Sajid Mahmood Bhatti, and Mahmood Alvi for the funeral prayer. A delegation of Minahj Women League led by senior leader Ms. Ayesha Mubashar also visited the residence of Shaheed Zainab and condoled with her family. Speaking on the occasion, Ms. Ayesha Mubashar said that a system in which innocent children like Zainab do not enjoy protection and sanctity of honour, should be sent packing.

Meanwhile, PAT Secretary General Khurram Nawaz Gandapur along with the senior party leaders visited the district hospital and inquired after the people who were injured by police firing. Talking to media, he said that brutal police of Shahbaz Sharif is playing with the lives of the defenceless people. He said that the chief minister has trained them in a manner that when anyone becomes a threat to his rule, they should pounce upon him and take his life. He said that DPO Kasur and the whole district administration should be suspended, adding that they have been aiding the culprits instead of protecting the oppressed and the weak. He also expressed his condolences with the youth who were martyred during the protest. 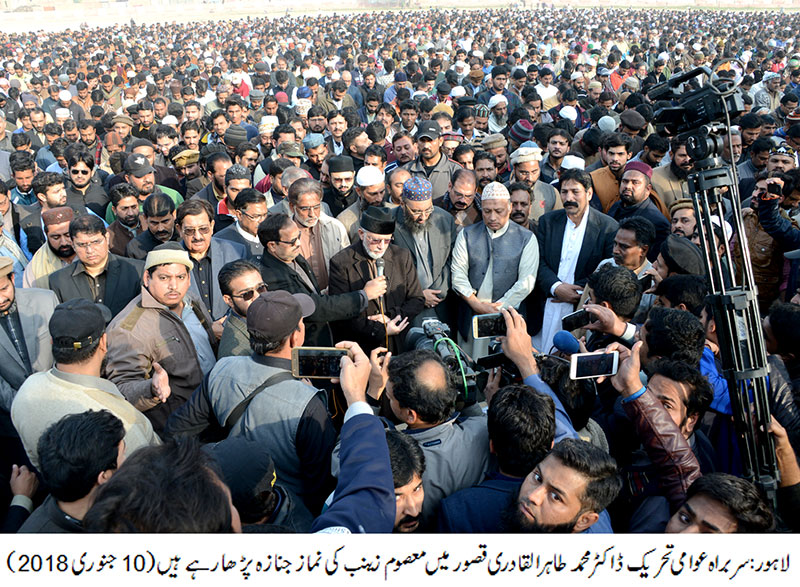 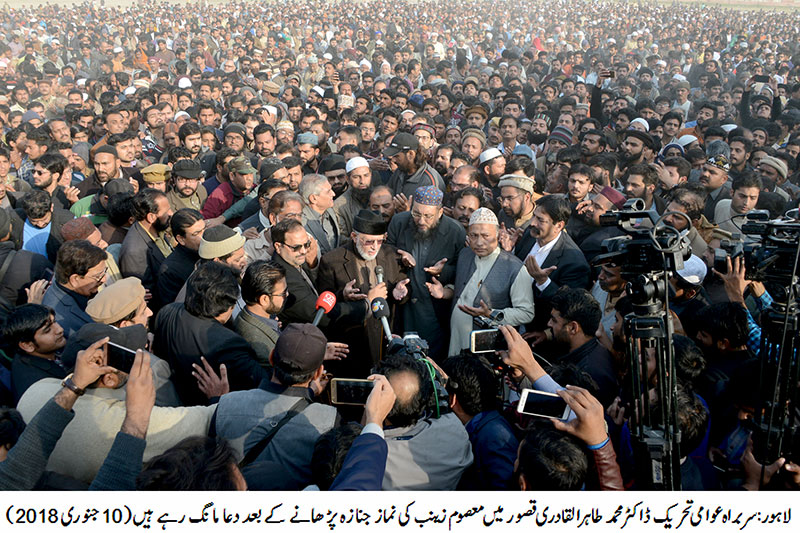