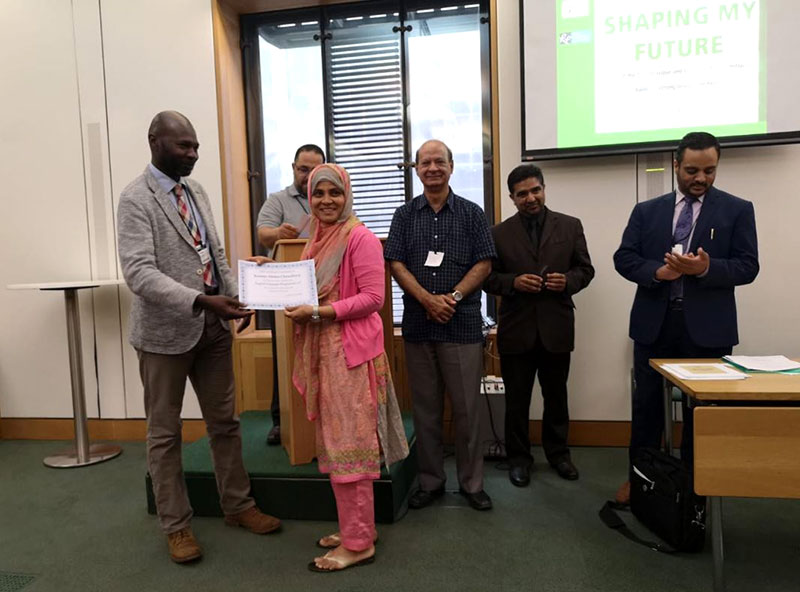 Newham is a place celebrated for its diversity and togetherness and the event on 12th July epitomised that. Inside the Houses of Parliament people from across the community, including Rosetta Arts, The Harp Foundation which supports the homeless, East London University, Bridges project, Charity4 Humanity, Social Action for Health, East London Genes and Health, the Barry Mcguigan Boxing Academy and many other organisations came together to celebrate the achievements of the young people who completed a series of workshops entitled, Shaping my Future - Democratic Engagement.

These sessions were initiated Minhaj-ul-Quran International (London), and held at their Mosque and Community Centre in Forest Gate, and were run in association with Come Incorporated and Newham Borough Council. They began in December 2017 and finished this January. The event also celebrated the success of the English for Speakers of Other Languages (ESOL) students who currently learn at Minhaj-ul-Quran.

“Every interaction throughout our lives shapes our future. Our pasts, things that happened when we were younger and our parents. We wanted to run a programme that shaped young people in a positive way.” Hence, he explained, that the aim of the sessions was to embrace diversity and inclusion and to provide an environment in which young people could develop their ideas and voices.

The discussions dealt with a range of issues which are confronting young people in the area, from equality to gangs and radicalisation. The importance of these workshops cannot be overlooked, not only, did every single panellist speak of the positive impacts of them, indeed, they proved to be so successful that they will commence again in the very near future, but they were also the first Mosque and Local Authority initiative.

With a forum of speakers from across our community, it was also a time for discussion about important issues that affect Newham, and an occasion to praise its diversity and togetherness.

The first speaker was Ghaffar Hussain from Newham Council, who Shahid Mahmood described as pivotal in getting the programme started. Mr Hussain further echoed Shahid in describing how the council wanted young people to engage with local democracy, create peer mentors and encourage activity in preventing crimes.

Next up was Detective Superintendent Shabnam Chaudhri. She began by praising Minhaj-ul-Quran International (London), as an organisation which embraces diversity and difference. Moreover, she thanked the many women who had made the effort to attend.

Chaudhri described her journey which eventually led her to becoming the first Muslim and Asian woman to be appointed as a Detective Superintendent of Scotland Yard.

Born in Pakistan, she came to England, at the age of two with her six brothers and sisters. Although she loved growing up in East Ham, indeed she still regularly visits her old community; she explained that she grew up as thinking racial hatred was normal. As she got older, she realised her dream was to be a police officer, she wanted to make a difference. Joining the Metropolitan Police in 1989 was “the best day of my life.”

With her career now spanning 29 years, she has tirelessly campaigned to raise awareness about issues, such as hate crimes, and pushed for more women, particularly Asian and Muslim women, to join the police. Unsurprisingly, for her many efforts, she has won dozens of awards,

Steering the conversation to the present, her speech moved onto the impact that technology has had on society, young people are now dubbed digital citizens after all. Nowadays young people can be exposed to so much online, and sadly this includes radicalism and gangs, which Chaudhri said can sometimes be seen as an escape from distressing situations.

Hence, she emphasised the importance of the workshops which had been held, as they provided a space for the young people to talk about the issue and educate themselves about better options.

The Minhaj-ul-Quran International (London) opened its doors in 1994. Many spoke of common ideas and the process of people coming together as the foundations of a community.

Shahid Mahmood described the next speaker, MP Stephen Timms who has lived and worked in Newham for more than 40 years, as carrying this through into the community today,

Mr Timms explained that, although to outsiders, Newham is a divided and fragmented community due to its diversity, the reality is the complete opposite. Because there are so many different groups, most people belong to something, whether that be a church or mosque. And thus, they are connected to the wider community, particularly thanks to workshops like this which involve both a faith organisation and local government. In fact, he argued, fragmentation only occurs when individuals don't have access to different groups. And therefore, do not have that strong sense of belonging that the people of Newman possess.

To round off, he thanked the Minhaj-ul-Quran International (London) for being consistently inviting. Not only through the Shaping My Future workshops, but also by inviting multiple faith leaders and councillors to their many celebrations.

Mr. Timmis also praised the exemplary ways in which Rosetta Arts are working with the organisation, through our long established partnership, and the powerful way in which the arts can be used as tools for social change. He referred to the recent Islamic Art Courses which we jointly ran and offered to all. These sessions were so popular that they are running again later in the year, with calligraphy added to the syllabus (http://www.rosettaarts.org/new-courses-for-2018/).

The next speaker Sanaz Amidi, Rosetta Arts’ Chief Executive. Sanaz spoke of Rosetta's historical and current projects and aims. A crucial one being, ‘opening up opportunities to people who don’t think creativity applies to them, who don’t think they have a role in the arts and creative industries.’

Therefore, through the work we do with Minhaj-ul-Quran International (London), we are able to work with Muslim people and particularly young Muslims. And provide them with access to institutions and resources which they would not normally be able to utilise. Hence when ‘we have taken them to Central St Martin’s and the National Theatre, their eyes lit up when they realised al that is possible - when they realised that, not only is it possible to develop careers in the creative and cultural sector but that people just like they are doing it and are succeeding in it.’

The next speaker was Anthony Lewis, founder of the Harp foundation, which campaigns to support the homeless and brings organisations together. Anthony talked about the need for every organisation and individual to work together for the betterment of everyone else. That was what communities are about and that is why we are here to look after each other. 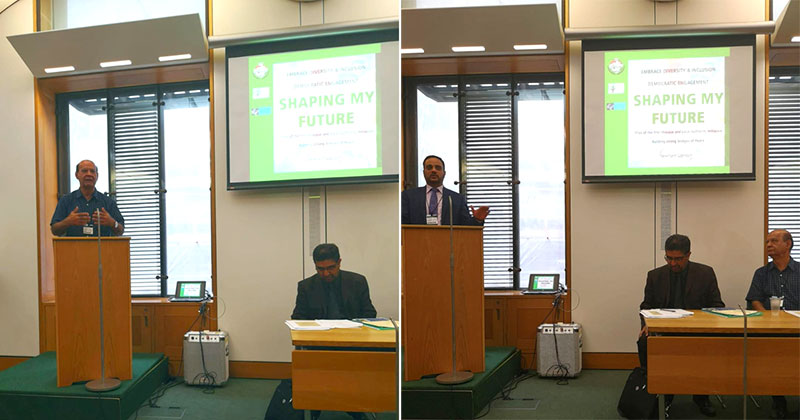 The next speaker was Advocate Sajid Hussain, director of Charity4 humanity, who stressed the need to work together and explained how his new organisation would support people throughout Newham.

The final speech was delivered by Tallat Bhatti who talked about the English for speakers of other languages classes and your space which helped people to voice their concerns and ensured they were listened to. She said that the platform of voicing people’s feelings, emotions and issues was provided by Minhaj-ul-Quran as well as a very open minded listening ear. She praised the work of MQI.

With the speeches complete, each student alphabetically came and received their certificates to a resounding sound of applause at their achievement.

Certificates were distributed to the students by the Director of Minhaj-ul-Quran International UK Syed Ali Abbas Bukhari and Datu Dr Shaukat Nawaz Khan, HE Hon. Ambassador to Pakistan for Sultanate of Buayan (Philippines)

The event was insightful and engaging, there were so many different opinions and discussions showcased at the forum and ceremony. This embrace of diversity, achievement and change completely embodied the spirit of Newham. 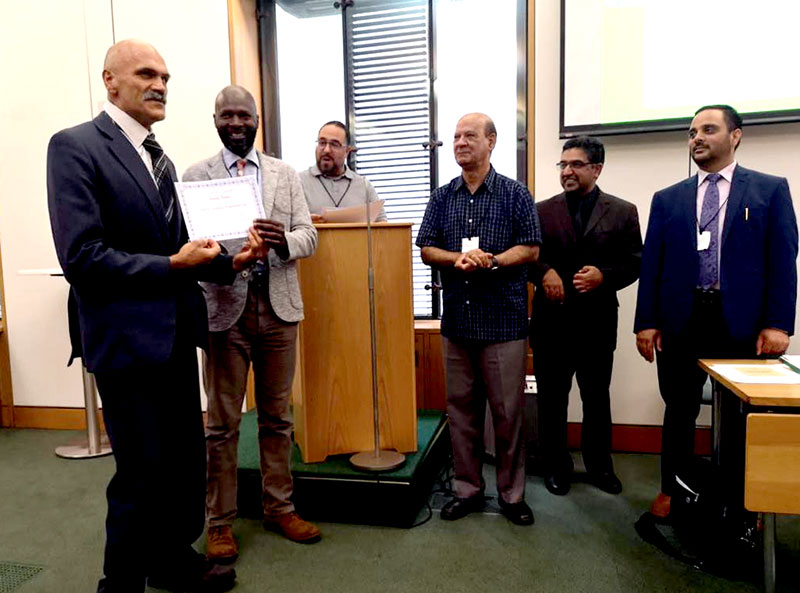