2019 will be year of justice for Martyrs of Model Town incident: Dr. Tahir Ul Qadri 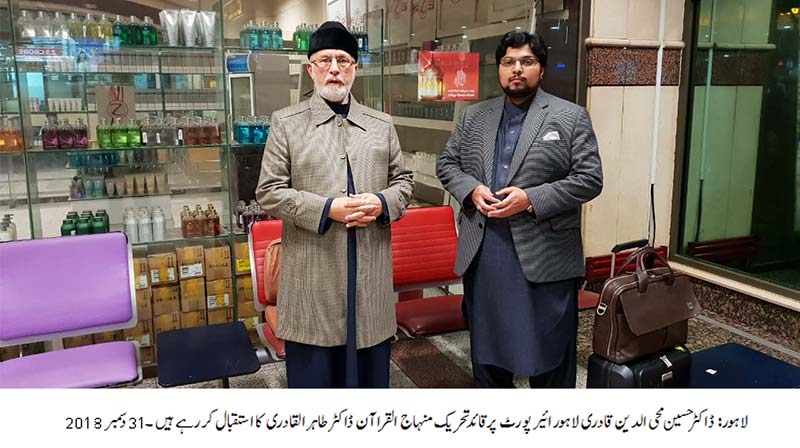 Lahore (31st December 2018) Office holders and Party worker warmly received Dr. Tahir Ul Qadri at Airport. He was in Saudi Arabia to perform Umera. Speaking with workers at Airport, he said Pakistani expatriates are worried about situation of country. Without eliminating corruption and injustice, economy cannot be brought at the track.

Quaid of Pakistan Awami Tehreek Dr. Tahir Ul Qadri has said that justice for innocent Zainab and killers going behind bars instead of power corridors are most noteworthy events of 2018. He is hopeful, 2019 will be year of justice for Bisma, Tanzeela Amjad, Shazia Murtaza and other martyrs of Model Town incident, and killers will soon face music. Speaking with workers at Airport, he said. Pakistani expatriates are worried about situation of country. Without eliminating corruption and injustice, economy cannot be brought at the track. He said role of judiciary against corruption noteworthy, and deserve a lot of appreciation.

He said Pakistan Awami Tehreek has struggled for years against political mafia of Sharifs, laid down lives, faced character assassination, fake cases, and incarceration of workers; but did not bow down before oppression of corrupt rulers. He said those who now claim they are being victimized, when they were in power, they wrongfully detained over 25 thousand workers of PAT; charged hundreds of workers in fake cases of terrorism; even F.I.R. of Martyrs of Model Town, was registered against workers of Pakistan Awami Tehreek. He said those who unleashed worst kind of atrocities against us, now have become an example for others.

He said Government and Judiciary has to role to play in rooting out injustice and corruption, but ultimate role is to be played by masses; they must hold those accountable who have made politics and vote a source to accumulate wealth by every unfair mean. Such elements should not be allowed to reach august houses. After performing Umera, when head of Pakistan Awami Tehreek reached home, he was received at Airport by senior party leaders and workers.