Minhaj-ul-Quran Women League (MWL) organized a 10-day Irfan-ul-Hidaya Quran Learning Course in which the women teachers were taught about the principles and methods of recitation, basics of the Quranic sciences, beliefs, and Hadith, public speaking, Quranic encyclopedia, and the fundamentals of the Arabic language.

In his keynote address, Dr Hussain Mohi-ud-Din Qadri said that the Holy Quran was sent to the mankind for its guidance. He said that success not only in this world but also in the hereafter lies in reciting it, understanding the meaning of its text, enlightening one’s heart with light of its knowledge and moulding lives accordingly. He said that there is no end to the greatness of the Holy Quran. He said that Allah Almighty has gathered all matters such as moral reform, guidance, correction of internal disorder, and the ways of success in this Holy Book. It contains all secrets to understanding the universe and why it was brought into being.

The MQI President further said that there is a dire need that the Muslims are persuaded to establish their connection with the holy Quran so that their relations with the holy Prophet (pbuh) is also strengthened. He said that MWL has rendered a great service by organizing the Quranic Learning Course that has benefited thousands of women.

Throwing light on the aims and objectives of the Learning Course, MWL President Farah Naz said that the Course has been arranged with a view to making the Quranic sciences popular in the society. He said that modern technology is being employed to make the teaching of the Course easy for the learners to understand. She said that the kind of scholarly work that the MQI is doing under the leadership of Shaykh-ul-Islam Dr Muhammad Tahir-ul-Qadri has not been done by any other organization.

PPP leader Barrister Amir Hassan said that education is not being imparted today but being sold. He lauded the role of the MQI in promoting knowledge, saying that in these dark times, the colleges, schools and the university set up by Dr Qadri are spreading the light of knowledge.

Ms. Musarrat Jamshed Cheema said that the MWL deserves to be congratulated for its highly appreciable role in promoting the knowledge of the Quranic sciences among the common people. 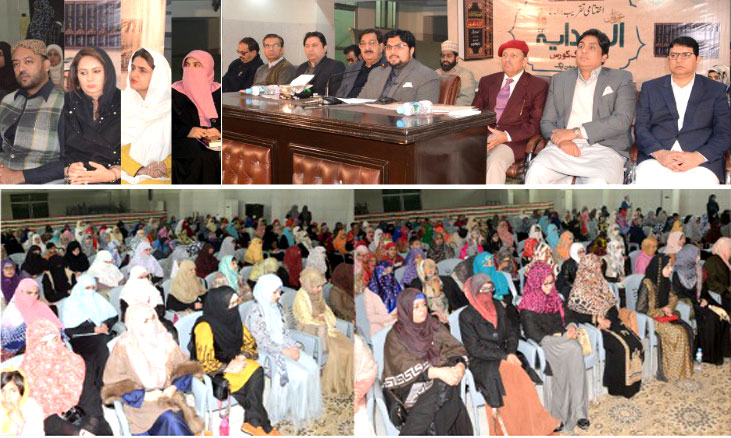