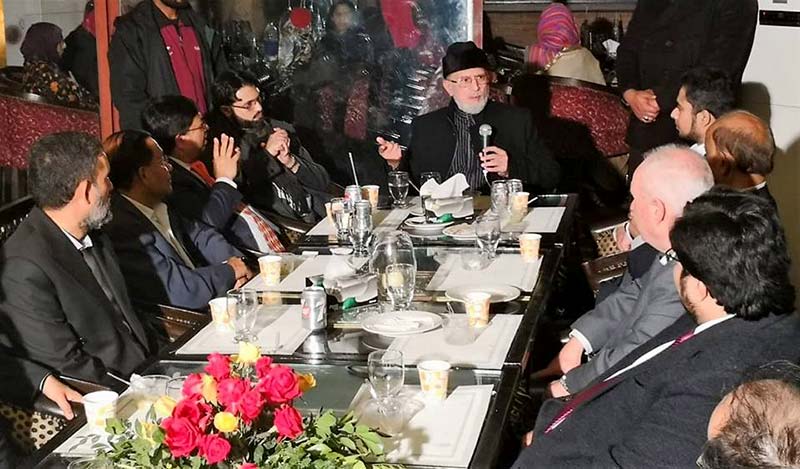 Shaykh-ul-Islam Dr Muhammad Tahir-ul-Qadri hosted a reception in the honour of the participating scholars and experts who came from different parts of the world to attend International Islamic Banking and Finance Conference held under the aegis of Minhaj University Lahore.

Addressing the reception, Dr Tahir-ul-Qadri said that the capitalistic system of economy fostered poverty around the world. He said that the developing countries like Pakistan have got into the quagmire of interests in an attempt to revive their economies with the help of debt from the international financial institutions. He said that the poor countries are left with no significant resources to spend on the social sector development including education and health after the payment of interest on the loans, stating that corruption is an added factor that eats the remainder of the resources.

Dr Tahir-ul-Qadri said that the time has come that the world gets to have a fair and even-handed economic system, one which does not create space for exploitation of the poor.

Dr Qadri said that the condition of 220-million strong Pakistan, which is an agrarian economy, is that it is paying more than Rs. 1300 billion on the payment of interest every year. He said that this amount is far higher than defence and development budget. He said that the current economic system only privileges a particular class, adding that only the notion of freedom has been left, while the fact remains that the international financial institutions are controlling the economies around the world and setting agendas for the indebted countries.

Dr Qadri said that as ‘Ijtehad’ is central to reconstruction of religious thought in Islam, this principle needs to be kept in view in matters of economy as well. He congratulated Dr Hussain Mohi-ud-Din Qadri on the launch of his book titled “Business Ethics in Islam” and establishment of Minhaj Certification Bureau during the Conference. He also thanked the visiting scholars for coming and sharing their knowledge and research with their peers and students in Pakistan.