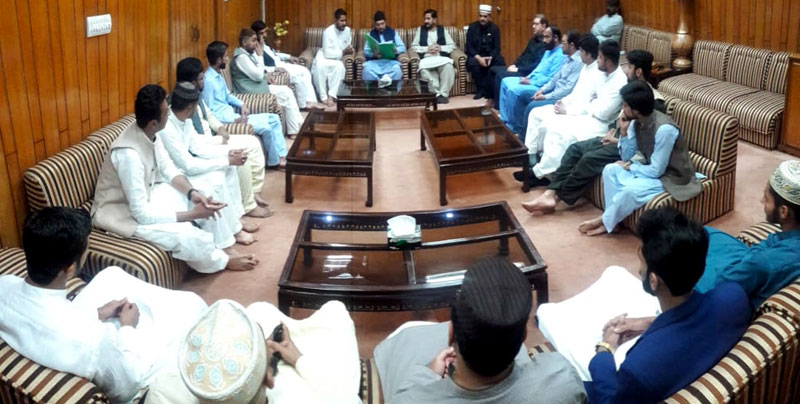 President MQI Dr Hussain Mohi-ud-Din Qadri has asked the youth to play their educational, and reformative role for progress, peace and stability of Pakistan. He said that no one can bring down a nation that has skilled, educated and patriotic youth. He said that youth are the pivot of phenomenal progress that Malaysia, Japan, South Korea and China have made in recent decades.

Dr Hussain Mohi-ud-Din Qadri made these remarks while talking to a MYL delegation Hafizabad that called on him at the central secretariat. Central President MYL Mazhar Mahmood Alvi was heading the delegation. The delegation included Amir Sultan, Haroon Sani, Umar Awan, Zeeshan Qadri and others. Allama Rana Muhammad Idrees, Noorullah Siddiqui, Jawad Hamid, and Raja Zahid Mahmood were also present during the meeting.

MYL Hafizabad chapter presented the progress report of its welfare and organizational activities and informed that they are arranging for the provision of clean drinking water in the government schools as well. The meeting was also informed that the MYL chapter also distributes ration among the needy and poor and also takes part in the tree plantation campaign.

Dr Hussain Mohi-ud-Din Qadri congratulated the office holders of MYL Hafizabad and promised to visit the district in the month of September. He said that it is a matter of great honour that Allah Almighty creates the feeling of public service among the youth. He said that MYL is among the organized and disciplined youth organization of Asia that has been in the forefront of serving humanity. He asked the students and youth to become part of Itikaf City and benefit from the lectures of Dr Tahir-ul-Qadri.