Minhaj Welfare Foundation distributed the food ration among more than 300 deserving families yesterday. Speaking on the occasion, Director MWF Syed Amjad Ali Shah said that helping the deserving and needy people is the best of human actions and worship. He said that Dr Tahir-ul-Qadri often says that the service of humanity is actually the service of Islam. He said that in line with the vision of its founding-leader, Minhaj Welfare Foundation has been rendering its services not only in Pakistan but also overseas. The families who got food ration thanked MWF and Dr Tahir-ul-Qadri for their kind gesture. Chairperson Voice, Ms. Sana Waheed, was also present on the occasion.

Syed Amjad Ali Shah said that MWF has been running various welfare projects with the cooperation of the well-to-do people and the provision of food to the deserving families during the holy month of Ramazan is one of the projects. He mentioned mass marriage ceremonies, mass sacrifice, health, education and water as some of the areas in which MWF has been rendering services. He said that Orphan Care Home is also another grand project of MWF which is being replicated in other cities of Pakistan after its successful operations in Lahore and Karachi.

Director of MWF stated that the Foundation has also been distributing scholarships among the poor but talented students. He said that it is the vision of the MQI that the doors of education should be opened on every poor child in order to make Pakistan prosperous. He said that we appeal to the affluent sections of society to come forward and join hands with MWF to carry forward the sacred mission of serving the deserving people. 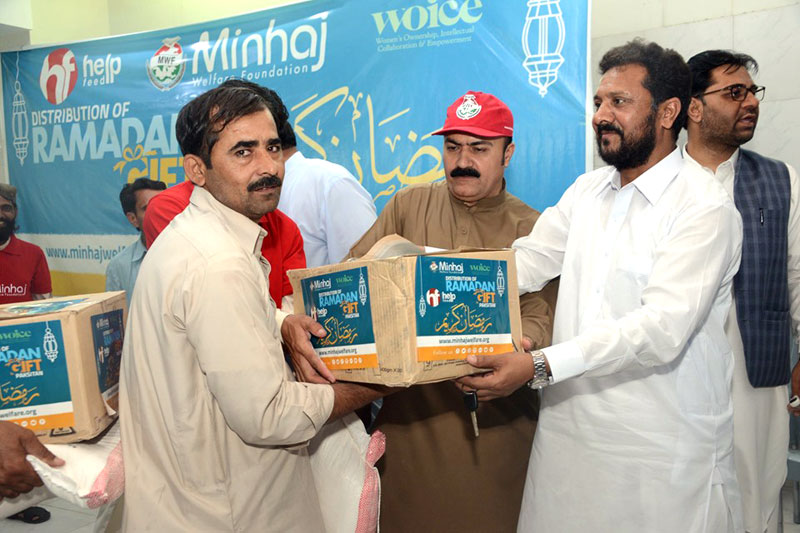