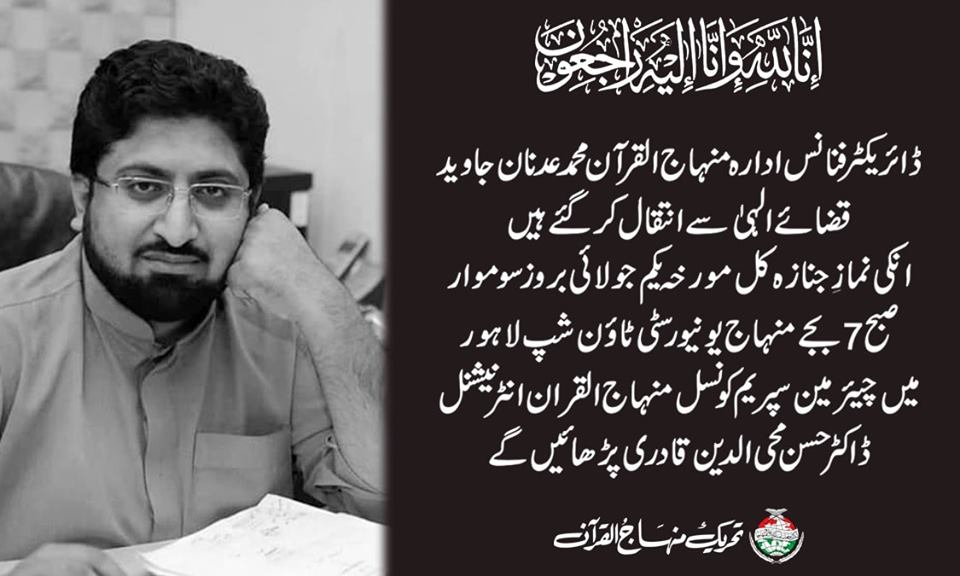 Muhammad Adnan Javed (Director Finance MQI), who is the nephew of Shaykh-ul-Islam Dr Muhammad Tahir-ul-Qadri has passed away. He suffered a heart attack a few days ago and remained in the hospital for treatment but breathed his last. Chairman MQI Supreme Council Dr Hassan Mohi-ud-Din Qadri will lead his funeral prayer of Adnan Javed at 7 am on Monday morning tomorrow at 7 am.

Shaykh-ul-Islam Dr Muhammad Tahir-ul-Qadri has expressed his deep sense of grief and sorrow on the sad demise of Muhammad Adnan Javed. He said that Adnan was a paragon of sincerity and honesty. He termed him as a great asset for the MQI, stating that he was courteous to everyone, sociable and an incredible young man. His treatment of all those who met him was based on love and respect. He said that the untimely death of Adnan Javed is a huge loss not only to his parents but also to the MQI family. He prayed to Allah Almighty to rest his soul in peace and give patience and fortitude to his parents to bear this irreparable loss.