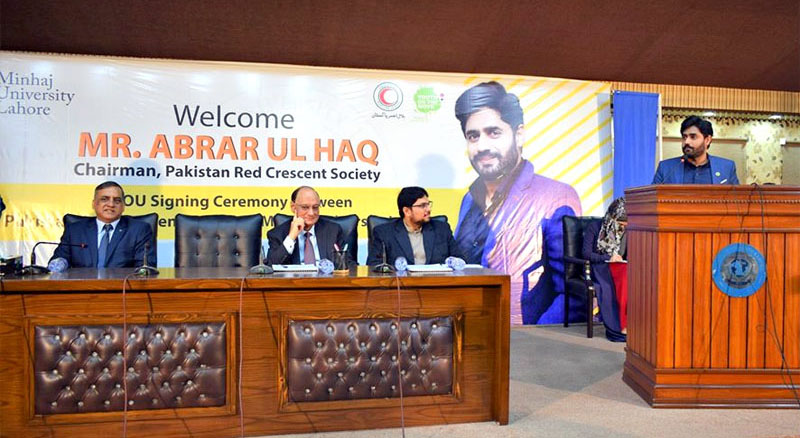 Chairman Pakistan Red Crescent Society Ibrar ul Haq briefed the ceremony about the ongoing projects such as first aid, ambulance service, youth and volunteers, blood donations, National Ambulance Service College, services during the natural disaster and the branches of the Society spread over the country. He said hundreds of thousands of volunteers are registered with Pakistan Red Crescent Society who offer their services voluntarily for various programs such as awareness campaigns and public health. He said that following the MoU with Minhaj University Lahore, not only will the number of the volunteers increase but the determination to contribute to public service will also be augmented.

Ibrar-ul-Haq said MQI under the leadership of Dr Muhammad Tahir-ul-Qadri has rendered exemplary services for the promotion of peace and knowledge besides serving the suffering humanity. He said Dr Tahir-ul-Qadri is a role model, stating that whenever the country faced any natural calamity, MQI and Dr Tahir-ul-Qadri supported their countrymen.

Dr Hussain Mohi-ud-Din Qadri, while addressing the ceremony, lauded the role of Pakistan Red Crescent Society. He said the services provided by the Society are unforgettable. He said the Society would be among the first responders whenever any eventuality hit. He congratulated Ibrar-ul-Haq on his appointment as the Chairman and hoped that he would leave no stone unturned to make Red Crescent Society into a dynamic organization of public welfare. He said thousands of students of MUL will be helping the causes of the Society. He said both MUL and PRCS deserve to be applauded for signing an MoU to deal with natural disasters and raise awareness for social development. He said the MoU will provide students with an opportunity to serve the people. 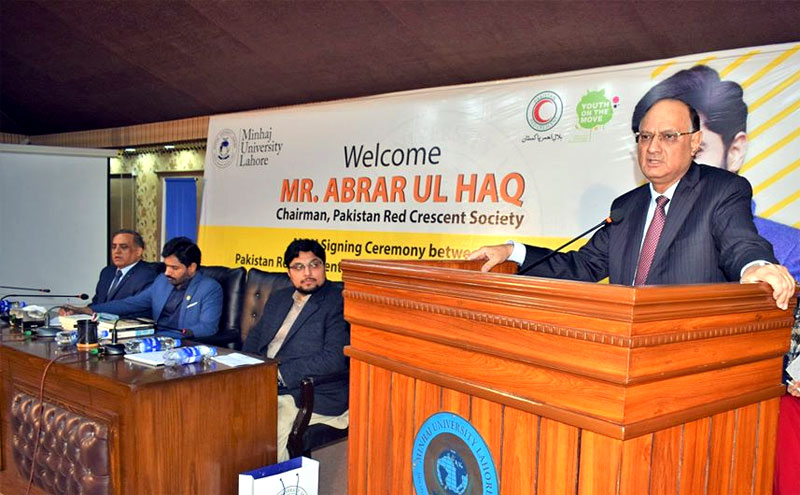 Speaking on the occasion, Justice (r ) Sheikh Ahmad Farooq said that the volunteers are the asset of any nation. He said Pakistan Red Crescent Society will impart modern-day training to the volunteers and make sure that all of them are equipped with the first aid training. He said the services of the educational institutions including MUL spread over the country are indeed praiseworthy.

Vice Chancellor MUL Sajid Mahmood Shahzad said in his speech that first medical aid plays an important role in saving human lives. He said Pakistan Red Crescent Society is doing amazing work in this regard. He said the students of MUL will get a chance to serve the people as a result of MoU signed today. He said we would be pleased to collaborate woth the Society for this noble work. He said a limited number of Pakistanis donate blood and there is a need to raise awareness about the importance of blood donation, adding that we would work with the Society to persuade people in this regard. He said our students are full of passion for public service.