The future of Pakistan is linked to educated youth: Dr Tahir-ul-Qadri 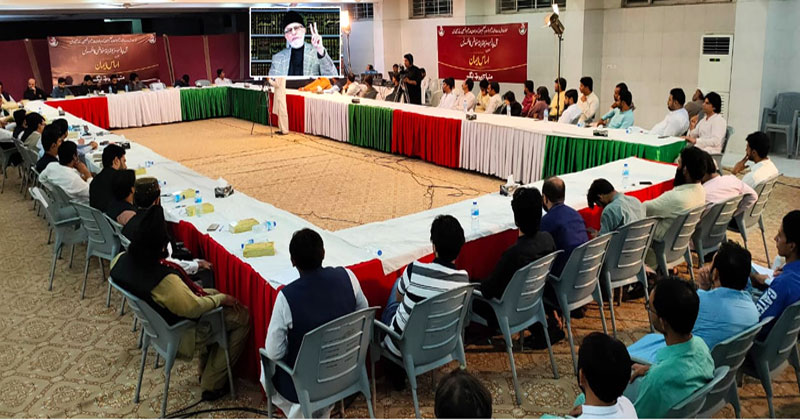 Minhaj-ul-Quran International (MQI) founding leader Shaykh-ul-Islam Dr Muhammad Tahir-ul-Qadri has said educated youths that are blessed with the strength of character, are the future of Pakistan. He said that protecting the youth from extremism and violent attitudes is the responsibility of all parties and religious scholars. He asked the youth to adopt the path of moderation and balance in the matters of life. He said that the enemy is using social media as a weapon of war, stating that our effort should not be to protect ourselves from its pernicious effects but also those around us. He said the concepts that are rooted in falsehood, lies and conservatism, no good would come out of them. He said that the youth should play their role against sectarianism. He said that the love of the Prophet's household and holy companions is the basis of our faith.

Dr Tahir-ul-Qadri expressed these views while addressing an "All Parties Youth and Students Conference", held under the banner of National Youth Alliance in the central secretariat of MQI. Minhaj Youth League hosted the Conference. MYL President Mazhar Mahmood Alvi welcomed the central leaders and delegations of the student organizations on their arrival at the secretariat and termed the Conference as a milestone for the solidarity of Pakistan. The youth and student leaders expressed their pleasure and extreme satisfaction on the scholarly and intellectual address of Shaykh-ul-Islam Dr Muhammad Tahir-ul-Qadri.

The youth and student leaders agreed on the need for holding similar conferences in the future as well and expressed the resolve to gather the youth around the ideology of Islam and Pakistan. The leaders of the student bodies also addressed the conference and congratulated Minhaj Youth League on making excellent arrangements for the event.