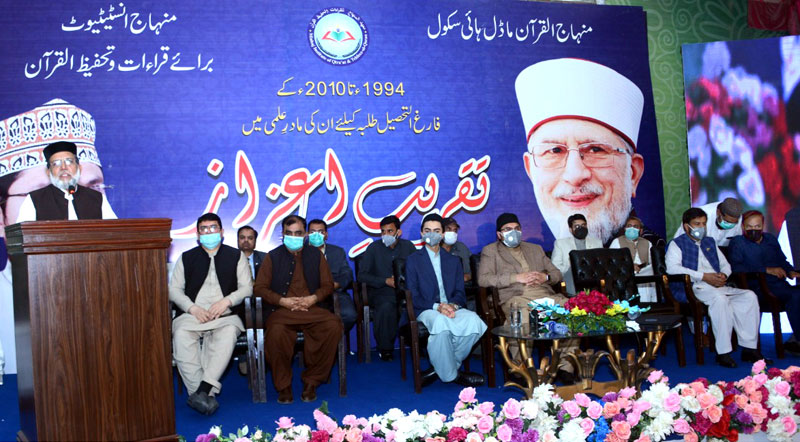 A ceremony was held in the honor of the graduate Huffaz students under the banner of Minhaj Institute of Qira’at & Tehfeez-ul-Quran and Aghosh Complex. Addressing the ceremony, president MQI Dr Hussain Mohi-ud-Din Qadri said that the teachers who torture students are causing estrangement of the new generation from both knowledge and religion. He stated categorically that the use of torture in religious seminaries is unacceptable, stating that the manner in which the students pursuing medical and engineering professions are imparted education, the students of religious seminaries should also be treated in the same manner and given education as per the same standard.

Dr Hussain Mohi-ud-Din Qadri said that preserving the Holy Quran in one's heart is a matter of immense blessing. He said that constant recitation is also required for the best Qaris. He said that MQI's educational institute, Tehfeez-ul-Quran, has produced four thousand Huffaz who are rendering services in the civil services, medicine, engineering, business, forces, and other departments at the moment. He welcomed the former students of Tehfeez-ul-Quran and Minhaj Model High School on their arrival in their alma mater. He advised them to stay in constant touch with their alma mater and provide their patronage to the students who want to get religious education.

Speaking on the occasion, Principal Muhammad Abbas Naqshbandi said that the students that are enrolled at Tehfeez-ul-Quran also do matriculation in addition to learning the Holy Quran by heart. He said those of the students who want to continue the higher studies have the facility of education up to Ph.D.

Col. (r) Mubashir Iqbal gave a briefing about the working of different departments of Aghosh Complex and invited the participants to pay a visit to the mega facility. A documentary on the Aghosh project was also played for the participants. The ceremony was kept short due to the Covid situation and the participants were seated in line with the recommended SOPs. All those who attended the ceremony wore masks.