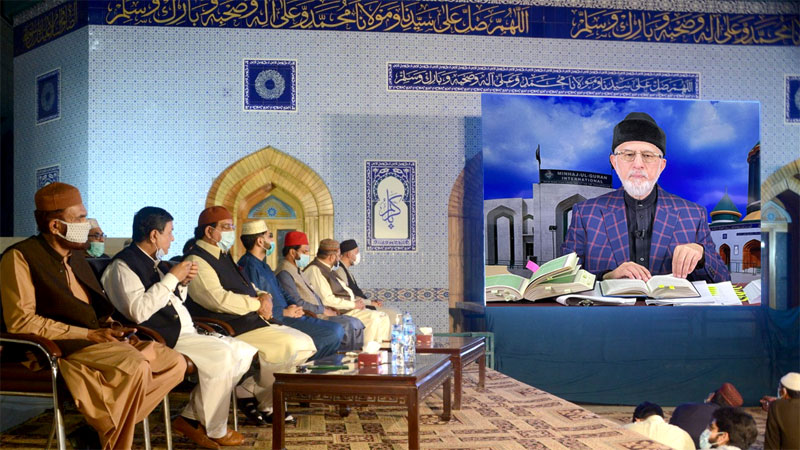 Addressing a spiritual gathering held at the central secretariat on the occasion of Shab-e-Barat, Shaykh-ul-Islam Dr Muhammad Tahir-ul-Qadri has said that the manner in which Allah Almighty made the prophets exalted among the men and Ramadan among other months, He has bestowed the same uniqueness and individuality on Shab-e-Barat among the nights.

Dr Tahir-ul-Qadri said that Dua is an important form of worship that can change one's destiny. He said that nothing else can change one's fate except prayer. He said that Allah's grace waits for the prayers of His creations on the night of the 15th of Shaʻban so that they pray and His mercy rains on them. He asked the faithful to spend the entire night in sincere repentance, adding that seeking forgiveness for one's sins is among the favorite prayers in the court of our Lord. He said that he who beseeches Allah in prayer has the doors of mercy opened upon him.

MQI leader said that Allah Almighty likes the act when His subjects express remorse on sins and seek forgiveness. He said we, as a nation, are the victim of many crises today and the fear has seeped through the land. He asked the people to offer individual and collective repentance in tearful prayer on this blessed night. He said this special night unlocks the door of repentance and is the source of pleasing Allah Almighty.

Dr Tahir-ul-Qadri said that the philosophy of forgiveness is that one should repent with utmost sincerity and vow never to commit any sins in the future. He said that since Dua changes the destiny of humans, therefore, we should keep praying every time. The Holy Prophet (pbuh) said that Dua is useful for an affliction that may have descended and also the one that has yet to come. The servants of God must make Dua binding on themselves.

Shaykh-ul-Islam said that the whole world including Muslims is facing the scourge of the corona pandemic today. He said that we should bow our heads before our Lord and beseech Him to rid us of this disease.

The prayer ceremony was attended by religious scholars, Mashaykh, renowned Qaris, and Naat khawans. Shaykh-ul-Islam Dr Muhammad Tahir-ul-Qadri made a special Dua for national peace, progress as well as riddance from the corona pandemic.