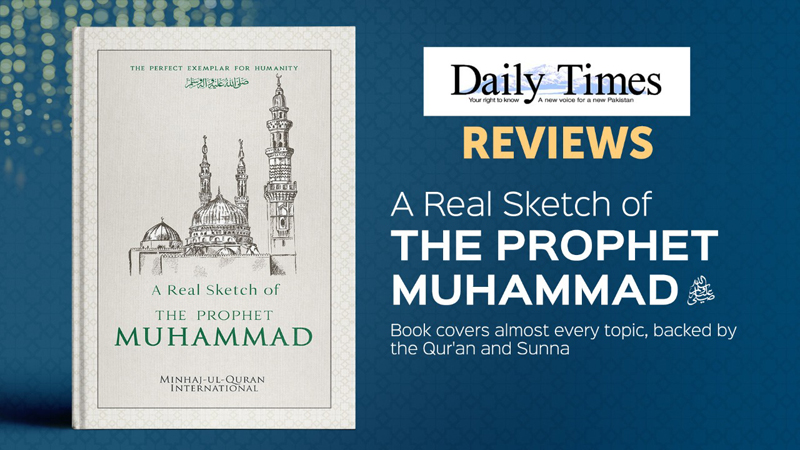 Book touches almost every topic, each of which is backed by the holy Quran and hadith

Minhaj-ul-Quran International is a religious organisation with an organisational network in more than 90 countries.

Its founder Dr Tahirul Qadri and his entire team work tirelessly to achieve the set goals and have succeeded remarkably. It functions on different fronts like Dawah, Education, publication and welfare. Having separate forums for women, youth and students, it plays a cardinal role in the mental, spiritual, and educational development of masses, regardless of age and gender, the effects of which are noticeable. The inculcation of a habit of book reading among people succeeded by spread of knowledge is greatest contribution of this organisation. Minhaj Publication department is very active in bringing new and amazing books into the public domain and inspire the public for reading. Thus far, Minhajul Quran has published thousands of books that are available in hard and soft copies. The books written by Dr Tahirul Qadri are highly sought-after; however, those authored by writers like Dr Hassan, Dr Hussain and others also have gained popularity among readers. These books having diverse themes, without any doubt, add to the knowledge of people and help to broaden the horizons of thinking, besides helping in self-purification. Howbeit, the freshly published booklet of MQI namely ‘A Real Sketch of the Prophet Muhammad (PBUH)’ caught my attention and subsequently inspired me to suggest it to others. The booklet just consists of 95 pages and the content it holds makes it the finest. It principally focuses on Prophetic life and underscores the humanistic aspect of Islam and its Prophet (PBUH). It has been published to counter the acts and narrative of anti-Islamic elements. Dr Tahirul Qadri comments that ‘blasphemers indulge in making blasphemous sketches of Prophet (PBUH) but we want to present an actual sketch of merciful Muhammad through this booklet – so is the name’.

The booklet starts with the heading ‘Traits of Islam’ that encompasses ‘Love, mercy, compassion, kindness, liberalness, tolerance, benevolence, forgiveness, forbearance, altruism, charity, peace, moderation. These aforementioned traits have been spotlighted throughout the book in light of the traditions of the beloved Prophet (pbuh). The booklet is comprised of two parts. Part one, having around 100 articles – gives information about the birth of the Prophet (pbuh), and importantly a general description of his personality. It gives an idea about the physical appearance of the Prophet (pbuh). It makes mention of the Prophet’s beauty. The latter takes a reader to the world of imagination as if he/she is facing Prophet (pbuh) and noticing every bit of his blessed appearance. Furthermore, it offers a description of His manners like – walking, eating, talking, sleeping, and his beautiful being. Indeed, this part of the book could prove contributory in kindling the love of best of creation (pbuh) and can serve as a guide to set our life in the right direction.

The second part of the booklet having 63 articles, offers a description that outlines the true image of Prophet Muhammad’s (PBUH) personality. This part is based on about 63 different short topics like the noble lineage of Prophet Muhammad (Peace Be Upon Him), his humbleness, gentleness, honesty, generosity, humanity and morality.

The second part of the booklet having 63 articles, offers a description that outlines the true image of the prophet’s (pbuh) personality. This part is based on about 63 different short- topics like the Noble lineage of Muhammad (pbuh), His humbleness and genteelness, honesty and generosity, humanity and morality. Booklet has given space to many other topics of great importance, which describes Prophet (pbuh) as a paragon of mercy, as the ambassador of peace and interfaith harmony, helper of weak and indigent, protector of refugees, protector of non-Muslims, caretaker of widows and orphans, emancipator of slaves, etc. Fortunately, compilers of the booklet have not skipped mentioning the anti-racism, and anti- communalism approach of beloved Muhammad (pbuh) that are existing global issues. A separate headline has been dedicated to both. Booklet tells us about the humanitarian and philanthropic attitude of the Prophet (pbuh). His struggle for social cohesion, advocacy for moderation, women’s rights and even animal rights, etc. have also been briefly discussed.

Prophetic teachings on the rejection of hoarding and wasting, revenge, enmity, hatred, etc. have been cited. Prophet’s role in making the first constitution, in encouraging knowledge and wisdom, creating awareness about environment conservation, and in introducing justness in warfare have been emphasized in the book.

In short, the book touches almost every topic and each of which is backed by Quran, hadith and excerpts from other credible sources.

As the name of the booklet indicates, its language is English but has also been translated into different languages to make it more accessible. This booklet could be less important for those having a pretty good grasp on Islamic literature, but for others including children, it is a must-read. We can add this book to the bookshelf of our wards, who nowadays have predilection for comic, novels, other storybooks, so that they are awakened to the reality of Islam. In case children could not comprehend it; parents can help them to read. This booklet deserves to be in every home, as it will allow us all to enlighten the soul. Also, school libraries can keep it for the benefit of both teachers and students. We can gift it to our non-Muslim friends to apprise them about the truth. Having said that, there is scope for modification as well. The reference and numbering of most of the traditions have not been given, which should be added to make it a perfect reference book. Otherwise, because of its handiness and best theme, it is a wonderful booklet that can help in understanding the truth and in nullifying evil designs of islamophobics. The whole compilation and publication team deserves applause for this effort. 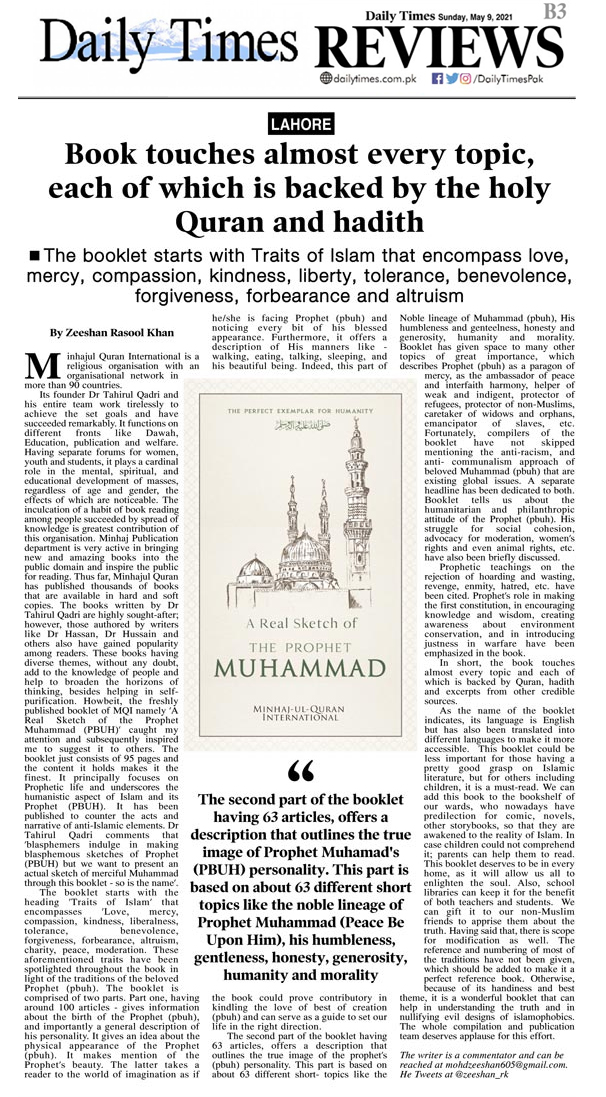