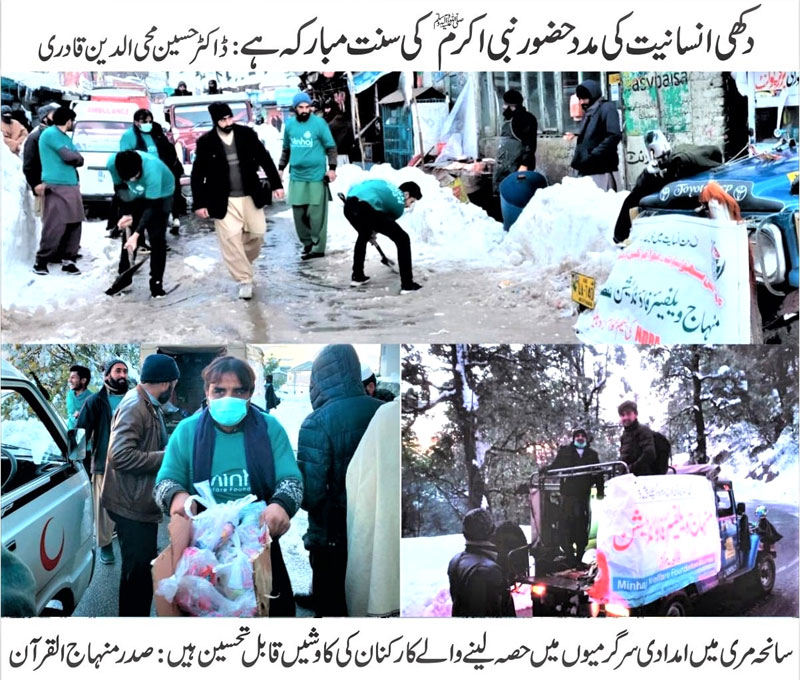 President MQI Dr Hussain Mohi-ud-Din Qadri has greatly appreciated the volunteers of Minhaj Welfare Foundation for their rescue as part of relief activities in Murree. Hailing the workers of PAT and MQI, he said that helping humanity at the most difficult hour is the practice of the Holy Prophet (pbuh), which entails huge rewards. He said that solid and timely arrangements need to be made in order to avert similar incidents in the future. He said that since the matter pertains to precious human lives, therefore, traditional and cliched statements should be avoided and all efforts be made for workable solutions.

Dr Hussain Mohi-ud-Din Qadri said that MWF workers and volunteers rose to the occasion and rendered excellent services. He said that the Murree tragedy should serve as a grim reminder that complacency has a cost. He underlined the need for effective decision-making and equally efficient chain of command so that the decisions taken at the top are implemented without any delay, thus saving both cost and time.

President MQI expressed his heartfelt condolences to the bereaved families who lost their loved ones. He said that we cannot bring the departed souls back but we can at least make sure that avoidable tragedies of such kind are not allowed again. He said that bureaucratic inquiries will do little to offer long-term vision, nor will they be enough to review the system. He said that the promotion of tourism is dependent on the provision of allied facilities to the tourists. "Murree tragedy should be considered as a test case and prompt systematic reforms introduced to set the things right," he concluded.