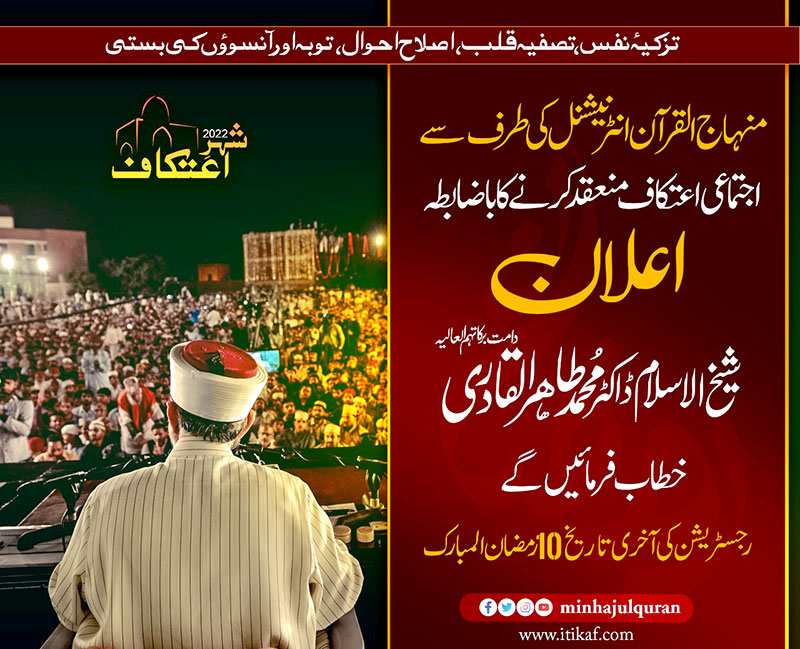 The Central Working Council of Minhaj-ul-Quran International has announced to arrange mass Itikaf this year during the last ten days of the holy month of Ramadan. MQI founding-leader and patron-in-chief Shaykh-ul-Islam Dr Muhammad Tahir-ul-Qadri will deliver his keynote lectures via the video link.

MQI Secretary General Khurram Nawaz Gandapur has sent a written letter to the local and overseas chapters of the movement in connection with the plan to hold Itikaf City. Those interested to join the City have been directed to register themselves before the 10th of Ramazan. They have further been asked to bring their vaccination certificates along with them. The collective Itikaf will take place at Jamia al-Minhaj, Baghdad Town, Lahore.

The preparations for the yearly event, which is happening after a gap of two years owing to Covid-19, have begun in earnest under the leadership of Jawwad Hamid, the secretary of the administration committee. The committee will be headed by Khurram Nawaz Gandapur and Brig. (r ) Iqbal Ahmad Khan. Many sub-committees have also been constituted to cater to the various aspects of arrangements.

Khurram Nawaz Gandapur said that we owe our gratitude to Allah Almighty Who has enabled us to hold Itikaf this year. He said that Itikaf is a great spiritual, reformative activity to be held at the MQI's platform for the purpose of purification of self and repentance. He said people from across Pakistan as well as abroad come to join the City during the last ten days.

Khurram Nawaz Gandapur said that the spread of Covid-19 disrupted the holding of the yearly mega event for two years. However, with the improvement in the Covid situation across the country, MQI has decided to set up the Itikaf City. He added in the same breath that all Covid-related SOPs will be strictly implemented. He further said that separate arrangements will be made for women as well.