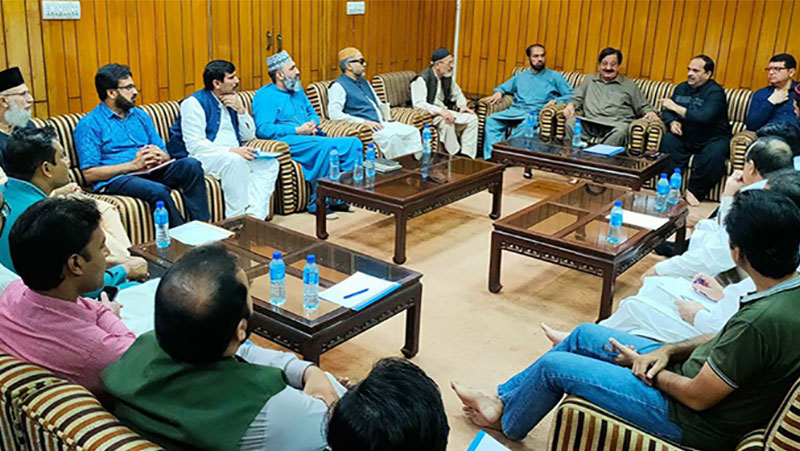 A meeting of MQI was held here at the central secretariat chaired by Secretary General Khurram Nawaz Gandapur. The meeting discussed the arrangements for the upcoming 39th International Mawlid-un-Nabi (pbuh) Conference to be held at Minar-i-Pakistan. It was decided to invite the leading political, religious and civil society leaders to the event. The meeting also decided to set up reception camps across the city and invite the people of Lahore as well.

The participants of the meeting paid tribute to the volunteers of Minhaj Welfare Foundation for their efforts and services in the flood-affected areas. It was also decided to take out small processions during the month of Rabi-ul-Awwal to invite people to join the central event at Minar-i-Pakistan.

Addressing the meeting, Khurram Nawaz Gandapur said that historic Minar-i-Pakistan hosts hundreds of thousands of the faithful everywhere who congregate to celebrate the birth anniversary of their beloved Prophet (pbuh). He said that Mawlid-un-Nabi (pbuh) is a source of strengthening our Iman.

MQI Secretary General said that the people belonging to all walks of life will attend the spiritual gathering, adding that it will be a truly representative event. He said that the venue will be decorated most befittingly. He said that we pay tribute to MWF and its volunteers for their great service in support of the flood victims. He said that helping the suffering humanity is our national, religious and moral duty. He said that MWF has carried out their relief and rehabilitation activities in the flood-hit areas.