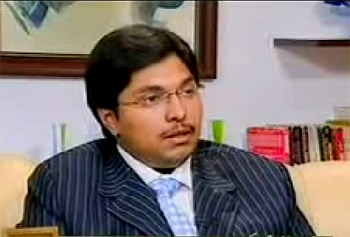 Member of Supreme Council (MQI), Sahibzada Hussain Mohi-ud-Din Qadri, participated in a live programme of the renowned 'Sama' TV on January 11, 2009 entitled "Power crisis in Pakistan the way out". Tahir Basharat Cheema, DG Load Management of PEPCO, was the other panelist, whereas Habeeb Ikram was the anchor person of the programme.

Speaking in the programme, Sahibzada Hussain Mohi-ud-Din Qadri said that everyone from the layman to an industrialist was adversely affected by the declared and un-declared load shedding in the country. The worst ever power crisis had also destroyed the economic fabric of the country discouraging international investment and causing a loss of millions of dollars to the various export industries of Pakistan. He said the government did not have any clear cut power policy. It had been vacillating from one stand to the other, not knowing when the scourge of load shedding would be got rid of. He said that there was a need to analyse the causes of the crisis as no crisis could emerge without a number of factors being responsible for it. In an answer to a question, he said that power was generated at the official level in many countries but in Pakistan, the private companies were asked to generate power, which has not yet fully materialized.

Criticizing the inaction of successive governments, Sahibzada Hussain Mohi-ud-Din Qadri said that construction of dams including Kala Bagh was sina qua non for power generation in the country but various governments that remained in power failed to create national consensus on the issue. These governments allowed the issue of dams to become politically disputed. He said that the governments took many decisions without taking people into confidence and what they needed was to begin the construction of Kala Bagh dam in the larger national interest. Had that been done, we would not have to undergo the nightmare of the load shedding. He regretted that ad hoc approach characterized our response to the power crisis, which was wrong.

Sahibzada Hussain Mohi-ud-Din Qadri said that the continued power crisis was causing the flight of capital in the country. He said there was a need to adopt long-term and sustained power generation policy as ad hoc measures could not resolve the issue of load shedding. He proposed the establishment of joint power grid in the region which would benefit the whole region. This model was successfully in operation in a number of countries of the world. "If the countries of SAARC pooled their power, it could provide us with lasting solution of the load shedding," he said.

He said that the power produced by the thermal source should be used for industrial sector whereas installation of larger power generating systems could take care of load shedding in the residential areas on short-term basis. In a reply to the opinion of Tahir Basharat Cheema that "one of the reasons contributing to power crisis was the non-payment of bills by various national institutions", Hussain Mohi-ud-Din Qadri said that leave alone these institutions, the whole nation was indebted to IMF. He said that these institutions existed before the rule of this government but asked why the situation went from bad to worse. He regretted why were people in responsible positions not apprised of incoming shortfall in power generation in advance, which led to this crisis of huge magnitude?

Tahir Basharat Cheema threw light on the history of gradual decline in power generation. He said that had the government been able to build up dams in time, this problem would not have assumed such horrible proportions. He said it was not possible to implement long-term policy at the same time. He said increase in fuel also contributed to the power crisis. He hoped that due to various measures taken by the government, the problem of load shedding would become manageable by December 2009.