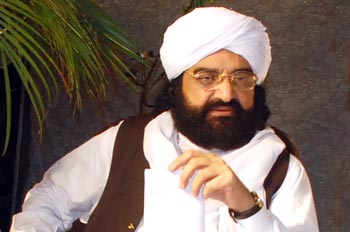 Renowned literary, scholarly and spiritual personality of Pakistan, Pir Syed Naseer-ud-Din Naseer of Golra Sharif, passed away on Friday around 2 pm on February 13, 2009. Shaykh-ul-Islam Dr Muhammad Tahir-ul-Qadri, Sahibzada Hassan Mohi-ud-Din Qadri, Sahibzada Hussain Mohi-ud-Din Qadri, Amir-e-Tehreek Miskin Faiz-ur-Rehman Durrani, Nazim-e-Ala Dr Raheeq Ahmad Abbasi and other leaders of MQI have expressed their deep grief and sorrow at the sad demise of Pir sahib. Shaykh-ul-Islam Dr Muhammad Tahir-ul-Qadri paid rich tribute to Pir Syed Naseer-ud-Din Naseer for his services in the way of Islam and condoled his death with his family members. He prayed to Allah Almighty to rest the departed soul in peace and give patience to the family to bear this huge loss.

Pir sahib was the ‘Sajjad-a-Nasheen’ of spiritual family of Golra Sharif and a poet of national eminence in his own right. He was a scholar, a researcher and author of about fourty books on several subjects. His poetic books had won acclaim. Pir sahib was against traditional mysticism and favoured it as a means of practical moral and spiritual training for development of personality. He also had vast following across Pakistan and abroad and would undertake visits of Europe for preaching purposes.

Pir Syed Naseer-ud-Din Naseer had great respect for Shaykh-ul-Islam and commended the contribution of Minhaj-ul-Quran International in different fields. He attended numerous programmes held at central secretariat of MQI. Just one day before his demise, he held a detailed telephonic conversation with Shaykh-ul-Islam Dr Muhammad Tahir-ul-Qadri. Nazim-e-Ala Dr Raheeq Ahmad Abbasi extended him invitation for participation in an upcoming Mashaykh Conference, which he happily accepted.

With the death of a person of Pir Syed Naseer-ud-Din Naseer’s stature, the country has been deprived of a great poet, spiritualist and scholar. May his soul rest in peace!