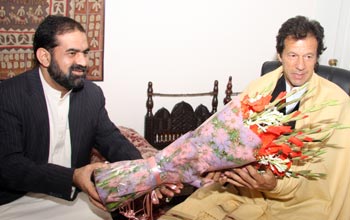 The MQI delegation presented him bouquet on behalf of Shaykh-ul-Islam Dr Muhammad Tahir-ul-Qadri and conveyed him his good wishes and prayers for early recovery. Secretary General MQI Dr Raheeq Ahmed Abbasi paid tribute to Imran Khan on the occasion and said that he was a national hero and an invaluable asset of the nation and the country. The MQI leaders and workers along with the entire nation pray for his good health and early recovery. Other leaders of MQI present on the occasion also expressed their good wishes and prayed for his good health. Imran Khan in the end thanked the MQI delegation for their visit and conveying to him good wishes of Shaykh-ul-Islam Dr Muhammad Tahir-ul-Qadri.