(Reuters) - Pakistani security forces fired in the air and used tear gas in the capital Islamabad on Tuesday to try and control protests led by an anti-government cleric who is believed to be backed by the military.

Live television coverage showed forces firing in the air - a serious escalation in attempts to control crowds - while supporters of Sufi cleric Muhammad Tahirul Qadri hurled stones at them. 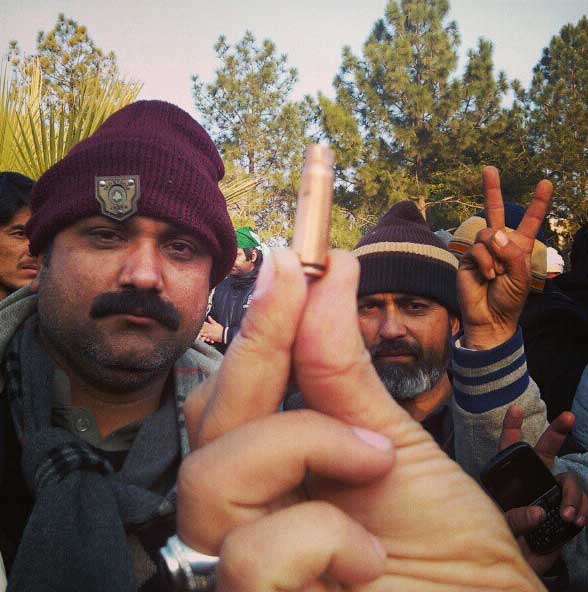 Qadri's spokesman told Reuters the crowds had prevented government forces from arresting the cleric. He said six supporters of the cleric were wounded.

Qadri's call has divided Pakistanis. Some hold him up as a champion of reform, others see him as a possible stooge of the powerful military, which has a history of coups and interfering in elections.

The populist cleric, who says elections scheduled for this spring should be delayed indefinitely until Pakistan's endemic corruption is rooted out, may not pose any immediate threat to the U.S.-backed civilian government.

But his calls for sweeping reforms have weakened the ruling Pakistan Peoples' Party, which has failed to tackle a staggering array of problems - from a Taliban insurgency to crippling power cuts to widespread poverty.

Few believe Pakistan's military has the appetite for another coup, especially since the Supreme Court has been standing up to the generals.

But the army would be happy to see figures like Qadri highlight the government's flaws, and perhaps play a behind-the-scenes role supporting him, analysts say. The military denies backing Qadri.