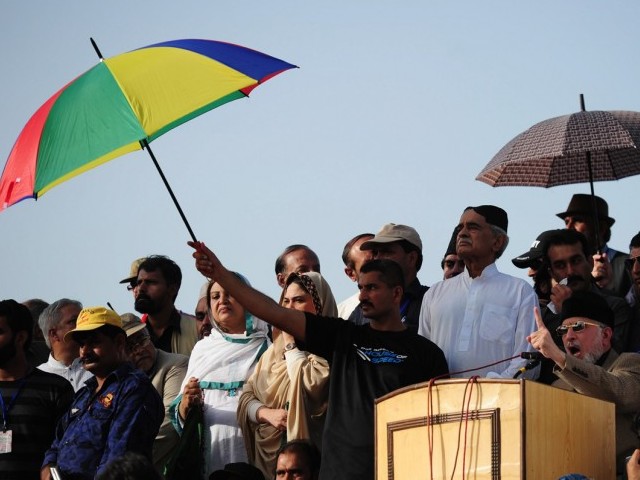 ISLAMABAD: Pakistan Awami Tehreek (PAT) chief Dr Tahirul Qadri, who has set a 48-hour deadline for the government to resign, claimed on Monday that the rule of the Sharifs would be over within the next few hours. He also called upon the people to come out of their homes and join the PAT rally because “the time for revolution is now or never”.

Addressing participants of his revolution march at Aabpara Chowk in the federal capital, Qadri urged the people to stage the world’s biggest and most peaceful revolution. He said that Pakistan was created without war, and that the PAT would also bring about a revolution without war.

“I urge Nawaz Sharif, Shahbaz Sharif and their governments to voluntarily resign, dissolve the assemblies, and surrender themselves,” he said and warned that after 48 hours, he could not give any guarantees.

The PAT chief once again urged the FIA and immigration authorities to put the names of Nawaz Sharif, Shahbaz Sharif, federal and provincial ministers, Rana Sanaullah and Rana Mashhood on the ECL to stop them from fleeing the country.

Qadri said that under the current system, neither corruption can be eradicated nor the people can get their rights. Qadri said he had already spelled out his 15-point charter of demands. “Prosperity of the people lies only in the change of the current administrative system,” he added. “A revolution against the unconstitutional system is inevitable.”

The populist cleric said that there would be no room for corrupt officers in the proposed national government. “Corruption will be eradicated from Pakistan and Rs1,000 billion will be saved annually by curbing corruption. We shall end the system of financial terrorism through our revolution,” Qadri said.

Flashing a copy of the Constitution of Pakistan, Qadri said his ‘Inqilab’ march is about sticking to the Quaid-i-Azam’s commitments. “There is no bigger Lenin, Stalin or Marx than me,” he said. “Pakistan will have a system that will be in line with the Holy Quran and the vision of Jinnah and Iqbal,” he added.