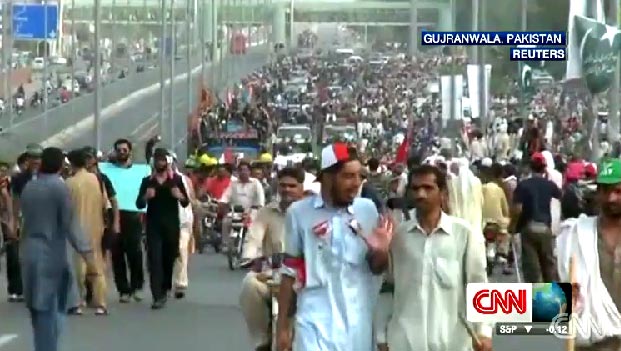 (CNN) -- Anti-government protesters have managed to breach a high-security zone in Pakistan's capital, despite the presence of thousands of security personnel.

A blackout had been enforced overnight Tuesday in Islamabad's "red zone," a heavily guarded area of the city containing key government buildings, as the marchers drew close. In the darkness policemen thumped their shields with batons in anticipation of a possible confrontation.

However they told CNN orders had been given not to react or use force.

For the past few days, thousands of supporters of cricketer-turned-politician Imran Khan have joined a march on Islamabad from Lahore to demand the resignation of Prime Minister Nawaz Sharif amid claims of vote-rigging during last year's election.

They've been joined by followers of outspoken cleric Tahir ul Qadri, who declared the protest a "revolution march." Qadri led protests against the government last year that brought the capital to a standstill, and has accused Sharif of corruption and campaigned for more to be done for the country's poor.

OPINION: Qadri: My vision for Pakistan

Sharif has denied the accusations against him, and has offered to set off an investigation into last year's vote.

Many of Khan and Qadri's supporters were equipped with gas masks and swimming goggles and carried thick wooden clubs. By late Tuesday, many had managed to get beyond barricades made up of barbed wire and steel shipping containers -- with some even using a hijacked crane -- to reach parliament without provoking a reaction from security forces.

At one point a number of female protesters approached soldiers and appeared to shower them in flower petals.

Officials had previously warned protesters not to enter this area, prompting fears of violent clashes. Earlier this month, at least five people died when supporters of Qadri clashed with police in the northwestern Punjab province.

However a spokesperson for the military released the following statement on social media Tuesday: "Buildings in the Red Zone are a symbol of the state and are being protected by the Army. Therefore the sanctity of these national symbols must be respected. Situation requires patience, wisdom & sagacity from all stakeholders to resolve prevailing impasse through meaningful dialogue in larger national and public interest."

Qadri told CNN that this "green revolution" had been "peaceful and democratic." He added: "This is a march for democratic reforms. We want rule of law. We want true participatory democracy in our country. We want to fight for human rights, for minority rights, for women rights and to eradicate corruption from society."

At around 1 a.m. local time on Wednesday, a handful of supporters of Khan's Pakistan Tehreek-e-Insaf (PTI) political party were the first to breach the final container blocking access to the front of the prime minister's secretariat. They edged past police lines, some appearing stunned that they'd made it into the capital's fortified red zone.