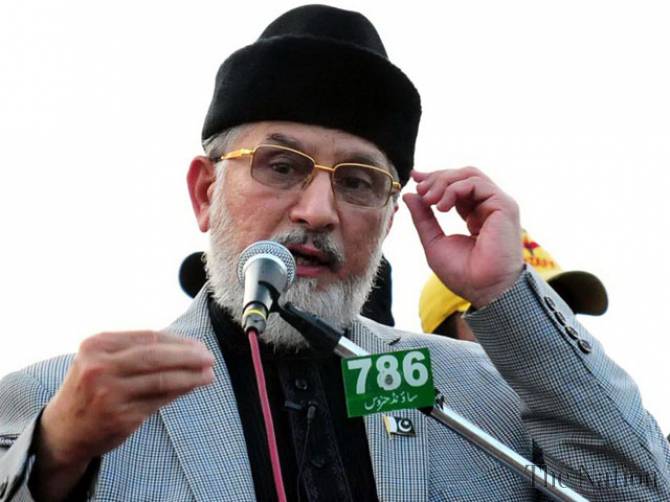 ISLAMABAD - The Lahore High Court’s decision of vetting the Sessions Court ruling in the case of Model Town tragedy proved to be an energy drink for Pakistan Awami Tehrik chief Dr Tahirul Qadri who on Tuesday announced that now it was not just about sending the government to packing but they were not going anywhere till Prime Minister Nawaz Sharif and Punjab Chief Minister Shahbaz Sharif are hanged to death.

Dr Qadri interpreted the Lahore High Court decision and judicial commission report as the aforementioned dignitaries were declared murderers. He claimed that the Judicial Tribunal had held Shahbaz Sharif responsible for the Model Town tragedy. He also demanded to make the Judicial Tribunal findings public.

While addressing his mob, Dr Qadri also accused Shahbaz Sharif of concealing the Judicial Tribunal report for 17 days. “The Tribunal was established to prove the rulers innocent.”

Dr Qadri quoted the tribunal stating that Punjab Police went to root out the security fences which were erected under the law, as per the decision of the Lahore High Court. He said that Shahbaz lied before the people that he ordered to disengage the police from Model Town. This point was added by the lawyers in the statement which was submitted to the tribunal.

Dr Qadri said that police got erected these barriers and the previous government of Shahbaz Sharif used to monitor this arrangement. If police wanted to remove these barriers it should have first of all got the high court order cancelled or it should have discussed this matter with the security officer of Minhajul Quran Secretariat. But the government launched the operation at night, he further said.

Dr Qadri in a very technical way bracketed PM Nawaz Sharif in his murder accusation of Shahbaz Sharif saying, “How could it be possible that Nawaz Sharif was not involved in the Model Town incident while Shahbaz Sharif was? He ordered his crowd to bring the shrouds and also requested his supporters to get out of their houses and join him in the Inqilab March.

In a very emotional tone, Dr Qadri said, “Why don’t you bring guns and kill us all? Nobody is listening to the poor and oppressed.” The PAT leader asked the participants if they were getting safe drinking water or treatment facilities. He said that it was better to die with bullets than dying with hunger. He also said that before firing at his mob, the government should open fire on him as he was not in love with life anymore.

Insisting on that the PM was also directly involved in the Model Town operation, Qadri said that a person from the PM House had told him that control was established therein to monitor the whole episode that took 14 lives. Qadri kept on speaking on the week points of the government and said, “They tell me to spare the democracy, what kind of democracy it is? You people make money, avail luxuries and the people die of hunger, you go abroad for the treatment and poor man does not get a tablet from the hospital, I give a dam on such a democracy.”

It is now the twelfth day of Qadri’s sit-in in the federal capital and from the day one, he is demanding for the dissolution of assemblies and formation of a national government. For the purpose, he had earlier given a deadline of 48 hours and after its expiry had held a session of its self-created Public Parliament where he decided starting marching towards the Parliament House.

Again he gave a deadline of 48 hours on Monday that is going to end today but what he is planning to do after the expiry of his latest deadline have no answer. As far as his demand for the registration of an FIR is concerned, there are many in the political circle those are endorsing it, but his demand to dissolve assembles is not gaining support from the power circles except those who are supporting them hideously.